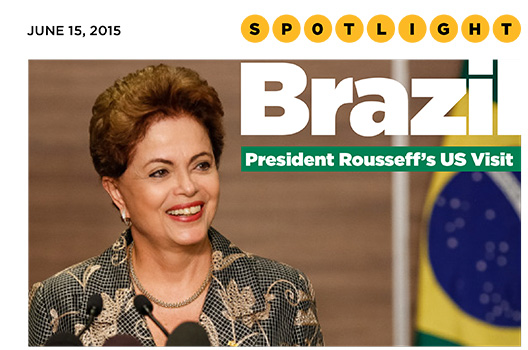 After a period of Brazil’s necessary distancing from the United States in the wake of the National Security Agency spying scandal in 2013, both countries are ready to reengage. The June 30 meeting between Brazilian President Dilma Rousseff and US President Barack Obama comes amid much change—both in Brazil itself and in the United States’ relationship with the broader region. A flurry of shuttle diplomacy is setting the stage for what many hope will be a substantive visit.

Rousseff’s official US trip comes in a period of domestic uncertainty—recession and corruption scandals are crippling her popularity and power. The rapprochement is a byproduct of Brazil’s foreign policy aligning with domestic policy: she needs to change Brazil’s—and her—negative narrative to a positive one. While Workers’ Party (PT) stalwarts remain skeptical of closer relations with the United States, today it represents one of the most important roads back toward renewed growth of the Brazilian economy. For the United States, this presents a unique opportunity to inject new life into the bilateral relationship. (A full Arsht Center report on the bilateral agenda, US-Brazil Relations: A New Beginning? How to Strengthen the Bilateral Agenda, will be released on June 19.).

What must happen during President Rousseff’s official visit for the United States and Brazil to view the trip as successful?

The working visit to the United States is part of a greater strategy to strengthen Brazilian exports, where the trade balance last year was the worst on record in fourteen years.1 Opening US markets to fresh Brazilian beef is one opportunity to capitalize on; Brazil is the world’s top beef exporter.

Brazil is also looking for technical partners to support innovation efforts in biofuel technologies and other areas. The United States is the top ethanol producer, and Brazil is the largest supplier of ethanol made from sugarcane.

Announcement of a pathway and timeframe to include Brazil in Global Entry—a first step toward expansion of the visa waiver program—would be a practical and tangible win for Dilma: in 2015, Brazil sent 2.3 million visitors to the United States. It would also benefit the United States.2 US tourism meccas such as Miami would get more visitors and, given reciprocity requirements, Americans traveling to Brazil would no longer need visas. Removing this hurdle would certainly increase Brazil’s competiveness as a US tourist destination.

The United States wants to regain its position as a key Brazil partner.

Prior to 2009, the United States was Brazil’s top trading partner until losing that position to China. Strengthening economic, trade, and investment ties is critical to regaining its position and further tapping into the $2.2 trillion Brazilian economy. The Chinese clearly see opportunity. In late May, Premier Li Keqiang signed thirty-five agreements totaling $53 billion in investment, upping the ante for the United States to double-down in its Brazil engagement.3

With Dilma’s trip, the United States hopes to begin the post-Snowden era and to lay a foundation of trust for future cooperation on regional and global topics, such as democracy and human rights. One promising area for cooperation is on climate change. President Obama is working hard to strike a deal in the lead up to the UN Climate Change Conference in December in Paris. The Brazilians—given their expertise in renewables and biofuels—could be partners in pushing for a broader, far-reaching global accord.

Defense cooperation, education, as well as science and technology initiatives are also on the US checklist. Both countries would benefit from peeling away policies that only serve to inhibit technical cooperation. The Defense Cooperation Agreement—that both countries signed in 2010—is expected to be ratified by Brazil’s Congress before Dilma’s visit. This would increase cooperation in research and development, information exchanges, military training, and the acquisition of defense products and services. Student and faculty exchanges are a direct and nonpolitical mechanism for enhancing bilateral cooperation, with great potential for catalyzing innovation.

But the final statements will likely overlook cooperation in Venezuela or Cuba, exploring a trade agreement, and reform of multilateral organizations—all of which could jumpstart the relationship.

Venezuela
A stable and prosperous democracy in Venezuela is in the interest of both the United States and Brazil. However, Brazil, and the region more broadly, are largely standing by as Venezuela unravels. A common Venezuela agenda to prevent further crisis would be a major milestone for the relationship. Given the sympathies of Dilma and the PT for left-leaning ideologies, this will be challenging. However, signs of hope exist. After facing criticism during the campaign for her close ties with Venezuelan President Nicolás Maduro, Dilma has begun to distance herself. She spoke out against the jailing of opposition leaders, and in early May, Brazil urged Venezuela to set a date for parliamentary elections.

Cuba
Brazil is an important regional partner for Cuba. In January 2014, Cuban President Raúl Castro and President Rousseff inaugurated a nearly $1 billion container terminal at the Cuban port of Mariel, built by the Brazilian construction company Odebrecht, and largely financed by the Brazilian Development Bank (BNDES).4 As part of her response to the June 2013 protests in Brazil over public services, Rousseff hired Cuban doctors to work in remote regions of Brazil. As the US-Cuba relationship continues to improve, Brazil can serve as an important interlocutor.

A comprehensive trade agreement with Brazil is unlikely in the short term, but both parties should start working toward this long-term goal. A free trade agreement will face many opponents from sectors in both countries that benefit from protectionist barriers. Top among them is the US agricultural sector and Brazilian industries with low technological content. The United States and Brazil are likely to begin to address longstanding barriers to trade—such as technical, sanitary and phytosanitary, import license, and customs barriers—but this is only a first step. There is much more to do on the trade agenda.

Multilateral Organizations
Tough discussion on reform at the United Nations (UN) and Organization of America States (OAS) could benefit both the United States and Brazil. Securing permanent UN Security Council membership remains a key foreign policy goal for Brazil. For the UN to remain the preeminent multilateral organization, its Security Council must reform to reflect the realities of new power dynamics. Its seventieth anniversary could provide a platform for these reforms, and Brazil, along with the other G4 nations, need a larger role.

Brazil’s relationship with the OAS, however, has deteriorated since 2011, when the Inter-American Commission on Human Rights (IACHR) requested that Brazil suspend construction of the Belo Monte hydroelectric power plant because of its impact on indigenous communities. In response, the Rousseff administration recalled its Ambassador to the OAS, which it has yet to restore. Reengaging Brazil will help raise the OAS at a crucial time for the organization.