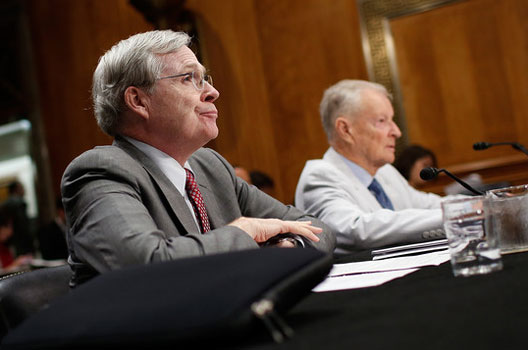 The following is the prepared remarks of Atlantic Council Board Director Stephen J. Hadley before the Senate Foreign Relations Committee on July 9 about Russia and the ongoing developments in Ukraine.

It is a great privilege to have the opportunity to appear before the committee this morning. I would like to discuss briefly what Russian President Putin is seeking to achieve by his actions in Ukraine, how far he is likely to press these actions, what should be U.S. and allied objectives in dealing with the Russian challenge in Ukraine, and what would be the elements of a strategy to achieve these objectives. The views I will express are my own and not the views of any organization with which I may be affiliated.

What is President Putin Seeking To Achieve By His Actions in Ukraine?

President Putin is often quoted as saying that one of the greatest tragedies of the 20th century was the dissolution of the Soviet Union. He gives as a principal reason for this conclusion the fact that it left hundreds of thousands of ethnic Russians and Russian-speakers outside the borders of Mother Russia. For two decades he has said his interests were in better treatment of Russian nationals living as ethnic minorities in countries outside Russia. But when he ordered the invasion of Georgia in 2008, the invasion and annexation of Crimea in 2014, and the active subversion and destabilization of eastern Ukraine, President Putin went way beyond any reasonable action aimed at improving the situation of these minorities. Instead President Putin has attacked, violated, and repudiated the basic principles of the post-Cold War settlement in Europe: acceptance of existing borders, respect for the sovereignty and territorial integrity of all states, and the right of all states to choose their affiliations and alliances free of coercion and the threat or use of force.

President Putin has an alternative vision for Europe that is less the recreation of the Soviet Union than the restoration of Russian greatness. Through the Eurasian Union, the Eurasian Customs Union, and the Collective Security Treaty Organization, President Putin hopes to establish a Russian-dominated confederation of states between the European Union on the one hand and China and the Asian States on the other. With Belarus, Kazakhstan, and Russia as core members, and Armenia, Kyrgyzstan, and Tajikistan likely additions, he is off to a good start. But he needs Ukraine to give the organization real economic and geopolitical heft. That means he must prevent Ukraine from becoming part of the economic and security organizations to its West, namely the European Union (EU) and the North Atlantic Treaty Organization (NATO). And that is what his efforts in Ukraine – as well as Georgia — have been about.

How Far is President Putin Likely To Press These Actions?

During the crisis provoked by President Putin’s invasion of Georgia, his initial objectives were somewhat limited. But as the operation succeeded, and when he thought his actions might not be effectively opposed, his objectives expanded accordingly. Indeed, he ultimately embraced the objective of toppling the democratically elected Georgian government in Tbilisi. Efforts by the United States and its allies, among other factors, caused the Russians ultimately to stop short of this objective. Similar “objective escalation” occurred in the wake of his ‘success’ in Crimea and could expand in connection with Russian action in eastern Ukraine or elsewhere.

One concern would be if Russia’s active subversion and destabilization campaign were to succeed in Ukraine, President Putin might try something similar in one or more of the Baltic States, such as Latvia. The objective here would be to show that the Article Five security guarantee given to these countries as NATO members was not worth the paper it is written on and could not protect these countries from being destabilized and perhaps even losing part of their territory.

At the most extreme end of the “objective escalation” spectrum, President Putin might even seek to split or destabilize the European Union itself. We know that he has been cultivating relations with extremist political parties in Europe particularly on the political right. These extremist parties have mostly only one thing in common – they oppose the European Union. Destabilizing the European Union could be attractive in its own right. But it could also preoccupy the EU with its own internal survival so as to distract it from efforts to reach out and embrace Ukraine, Moldova, Georgia, and other countries between the European Union and Russia’s Eurasian Union.

The best way to seek to prevent President Putin from moving up the “objective escalation” ladder is to seek to deny him success in his current efforts and to show that any future efforts will be effectively opposed.

What Should Be U.S. and Allied Objectives In Dealing With the Russian Challenge in Ukraine?

The United States should work with its friends and allies to seek to:

— Deter Russia from further action against Ukraine or any other state – in violation of the basic principles of the post-Cold War settlement in Europe.

— Deny targets of opportunity that President Putin can exploit to advance his agenda or, to put it another way, either eliminate or harden Europe’s vulnerabilities against further Russian action.

— Reassure those NATO allies vulnerable to Russian pressure of NATO’s Article Five commitment to their security.

— Reenergize the historic vision that the United States and its friends and allies share of a Europe whole, free, and at peace as an alternative to President Putin’s vision of Russian domination of its neighbors and of increasing authoritarianism at home.

— Distinguish between Putin and Russia and thereby avoid re-dividing Europe or seeking to exclude or isolate Russia from Europe by disregarding or disrupting the historical and economic ties between Russia and its neighbors to the West.

I understand that this last point will be controversial in some quarters given the total unacceptability of President Putin’s actions. But it is in the interest of the United States and the rest of Europe to keep the door open to Russia to take its place in a Europe based on the post-Cold War principles on which a Europe whole, free, and at peace can be built. This will require Russia to change its current behavior, either because of a change of heart on the part of President Putin (however unlikely) or because of the efforts of those in Russia committed to a more democratic and peaceful future for their country. We must leave the door open to them — to give them hope.

What Would Be the Elements of a Strategy To Achieve These Objectives?

Briefly, a comprehensive strategy seeking to achieve these objectives could include the following elements:

— Complete the Transatlantic Trade and Investment Partnership (TTIP) as a way to bind Europe together and to the United States in a relationship of economic growth and prosperity – extending the agreement to include those European countries with customs unions or free trade agreements with the EU already, such as Ukraine and Turkey, while leaving the door open for, ultimately, a more peaceful and democratic Russia.

— Develop a joint transatlantic energy strategy that will reduce the EU’s dependence on Russian oil and gas — through such things as liquid natural gas (LNG) shipments from the United States, the development of shale oil and shale gas in Europe, better use of existing pipeline infrastructure to reduce dependence on Russia, and construction of new non-Russian controlled pipelines.

— Resume the European Union’s “open door” to association agreements and ultimately membership for those countries to its east that seek such membership – and include them in a way that does not require them to sever existing and historical economic ties to Russia.

— Recommit the United States to the security of Europe in both word and deed, through additional deployments and exercises of American forces in Europe along with our NATO allies and other friends.

— Revitalize the NATO alliance by additional planning, exercises, and military capability – especially on the part of America’s NATO allies — directed to NATO’s core mission of maintaining security in Europe — while maintaining an open door to new members that meet its criteria.

— Help nations subject to Russian pressure to strengthen their own capacity to defend their territory from either armed attack or subversion/destabilization including by providing military, paramilitary, and police training and equipment.

— Help the Ukrainian people to overcome two decades of squandered trust and missed opportunity by their leaders and to build an inclusive, democratic, and non-corrupt government and market-based economy that can provide security and prosperity to all Ukrainians.

There has been a lot of talk about economic sanctions against Russia. These are an important element of a comprehensive strategy. So far, the United States and its allies have threatened more sanctions then they have delivered, undercutting the credibility of this element of strategy. But sanctions are only part of a strategy not the sum total of it. The level of the sanctions imposed on Russia in the short term should not be the measure of the success or failure of the overall strategy. For the goal of the strategy should be to change over time what might be called the “correlation of forces” in Europe so as to reduce Russia’s leverage and deter the kind of Russian actions we have seen in Georgia and Ukraine. In this context, the other elements of a comprehensive strategy outlined above are perhaps as important if not more important than short-term economic sanctions.

Image: Atlantic Council Board Director Hadley Testfies Before Senate on Russia and Ukraine