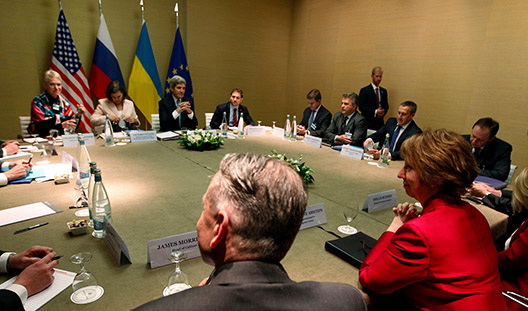 The results of last week’s Geneva conference on Ukraine offer a glimmer of hope. We’re a long way from seeing calm return to Ukraine, but the text of the agreement provides the most hopeful sign yet that a Crimea redux, or worse, can be averted in the Donbas, Ukraine’s turbulent, Russophone east.

That’s one take on what happened at Geneva.

There’s another, the gist of which is that Russia was appeased at Geneva and Ukraine sold down the river, with its leaders’ complicity, no less.

Let’s start with what can be said in defense of Geneva.

For openers, Moscow took a new tack toward Ukraine’s nascent government, which it had dismissed as an illegal, coup-created cabal containing neo-fascists, never mind that Ukraine’s rightists are a small minority in the cabinet and parliament and a fringe element in public opinion. Having adopted this narrative, Russia refused to negotiate with Ukraine’s leaders. But Ukrainian foreign minister Andrii Deshchytsia was a full participant at Geneva, along with Secretary of State John Kerry, EU foreign policy chief Catherine Ashton, and Russian foreign minister Sergei Lavrov. Had Vladimir Putin wanted to make a bad situation worse, he could have stuck to his guns and shunned Ukraine’s authorities.

The Ukrainian leadership, for its part, agreed to an amnesty for the Russian nationalist groups, which have commandeered buildings in at least ten towns in the Donetsk province to advance their campaign for a Crimea-like referendum and have been busy in Lugansk province as well. And Kyiv reaffirmed its commitment to constitutional reforms aimed at devolving power to local councils (while continuing to reject Russia’s push for a province-level federalization of Ukraine) and according Russian the status of an official language.

The Geneva negotiators agreed that “illegal armed groups” must be disarmed and vacate the buildings they seized. The vagueness of this formulation has already enabled Moscow to contend that Ukraine must take the lead by disarming far right groups such as “Right Sector.” But what’s positive is that the catchall wording clearly covers Russian nationalist groups in the Donbas, which, even if they aren’t simply Russian puppets, are bolstered by Moscow’s backing for their demands.

Now to the contrasting assessments of what occurred in Geneva.

Some knowledgeable Western critics have slammed the deal hammered out there as a sellout. Indignant commentaries in the Ukrainian press indicate that it isn’t playing particularly well there either. The negative appraisals aren’t limited to opinion pieces in Ukraine’s lively press or blogosphere. A friend who’s far more knowledgeable about Ukraine than I spoke recently with a former high-level Ukrainian official and learned that the latter was livid at what he deemed a cave-in at Geneva and particularly outraged that Russia’s Crimean land grab wasn’t denounced.

Andrei Illarionov, a respected Russian economist who served as Putin’s senior economic adviser from 2000-2005 but resigned to protest the creeping authoritarianism in Russia, has also savaged the agreement.

Among Illarionov’s criticisms are that Geneva yielded no condemnation of Russia’s seizure of Crimea; no Russian pledge reaffirming Moscow’s commitment, made in the 1994 Budapest Memoranda, to Ukraine’s territorial integrity; and no requirement that Russian intelligence operatives and special forces (Spetsnaz) that have infiltrated eastern Ukraine be withdrawn. Illarionov also complains that the Geneva agreement lays the groundwork for federalizing Ukraine, though it’s hard to reach that conclusion based on the text.

As Illarionov sees it, Russia and the United States decided the fate of a sovereign country. Geneva 2014, he concludes, was worse than Munich 1938 because, unlike the Czechs, the Ukrainians participated in enabling the ignominious outcome.

So which is it: Is Geneva a defensible deal or a barefaced betrayal?

Let’s stipulate for argument’s sake that what the critics want would have been desirable. Let’s also agree that Russia’s seizure of Crimea was based on a bogus, unconstitutional referendum, one backed by a PR campaign powered by the patently false proposition that Ukraine had been hijacked by fascists and that wanton, widespread attacks against Russians were underway—that something approaching ethnic cleansing was, if not afoot, then in the offing.

Even so, negotiations aimed at preventing a crisis from boiling over into war—which this one could—are not about wish fulfillment or getting the guilty to confess and atone for their sins. They’re about achieving what’s feasible given the underlying arithmetic of power and array of interests.

Seen thus, Russia has several ways to foment more trouble in eastern Ukraine, and the forces necessary to occupy a slice of it. No one—not the United States, not NATO—would fight Russia were that to happen. Threatening anything of the sort would amount to verbiage that would raise Ukrainians’ hopes (dangerous) only to dash them (unconscionable). Hard though it will be for them, Ukrainians must come to terms with the limits of what even the governments most sympathetic to them are prepared to do.

Ukraine’s plight is a classic instantiation of the situation depicted in Thucydides’ Melian Dialog. As the mighty Athenians said to the hapless Melians whom they intended to subdue, “You know as well as we do that right, as the world goes, is only in question between equals in power, while the strong do what they can and the weak suffer what they must.” No one came to Melos’s rescue, above all not the Spartans, on whom they had counted. Ukraine is not the first state to suffer thus, Russia not the first to inflict such suffering.

It could be said in response that what’s required is to change the ratio of power so that Ukraine escapes the Melians’ predicament.

Let’s look at the options for getting tougher on Russia, ruling out war, which not even Putin’s fiercest foes recommend.

One of them is ratcheting up the sanctions already imposed on Russia so that Moscow starts to pay a bigger price for its misdeeds, and the critics of the Geneva deal favor it. But here’s the thing: Were Putin to occupy a part of eastern Ukraine in response he would gain counter-leverage, and he’d use it in his own fashion and on his own schedule.

Moreover, the tougher the sanctions contemplated, the greater the divisions between Europe and the United States and among European governments. The dissonance within the Atlantic Alliance is apparent even now. That’s because Europeans, especially those inhabiting NATO’s eastern wing, are exposed to Russian power in a way that Americans simply are not. (Not that there’s any support in the United States for war with Russia.)

And it’s not just a matter of Russia’s power and propinquity, though with 40,000 Russian troops massed near Ukraine’s eastern and northeastern borders, that’s not a negligible consideration.

Europe’s trade with Russia approximates about a half trillion dollars. EU economies import on average, about a quarter of their natural gas from Russia. Some—the Baltic countries and Romania and Bulgaria among them—are far more dependent. The EU is the largest single foreign investor in Russia. Economic pain wouldn’t, therefore, be a one-way affair. That’s not a trivial fact given Europe’s economic plight.

Besides, the most important EU country, Germany, is noticeably skittish about additional punitive economic measures, such as sanctions covering entire branches of Russia’s economy, particularly hydrocarbons. The Germans fear that they would aggravate tensions and deepen the crisis. Putin is hardly popular among Germans, but so is the prospect of a scrap with Russia on Ukraine’s behalf.

It’s not just Europeans who are unsure about expanding sanctions. The Obama administration is divided,and American companies doing business in Russia are anxious.

The mood in Europe could change should Putin’s troops march into the Donbas. But that doesn’t seem to be Putin’s plan. Instead, it’s to use the influence gained by the turmoil there, which the Kremlin has helped orchestrate, to press for more concessions, such as Ukraine’s neutrality and federalization.

The Geneva agreement’s opponents lambaste its failure to address Crimea. But the reality is that, for now at least, Crimea is lost to Ukraine. Countries are free to not recognize Russia’s absorption of Crimea, but that won’t change the facts on the ground. No one is prepared to use force to change them and few, if any, believe stricter sanctions will do so.

That’s why Kerrysaid that he hadn’t come to Geneva “to talk about Crimea,” a comment that elicited anger from many Ukrainians. Crimea’s loss is understandably hard for Ukrainians to accept. They’ve been done an injustice, and they want justice done. But if Crimea’s return is what would constitute justice, the harsh reality is that no country is prepared to do what would be needed to deliver justice thus defined.

In short, the results Geneva’s critics desired simply weren’t feasible. Lavrov would never have agreed to a text that included Russia’s condemnation. Had Russia’s Crimean capture been denounced during the talks, they would have degenerated into name-calling and rhetorical volleys. That would have made for good theater and juicy headlines and made Geneva’s critics feel good about the bad guys having been blasted.

Expressing outrage can be cathartic, but it contributes nothing to cooling a crisis like this one, which could descend into massive ethnic violence, even war. Better to keep one’s eyes on the prize: preserving Ukraine’s unity and preventing bigger, bloodier clashes in the Donbas that could draw Russian troops across Ukraine’s border.

Once the Orthodox Easter truce (such as it is) ends, we’ll know whether the Geneva framework holds up and can enable additional achievements.

Here are the questions to which we’ll soon find answers: Will Russia goad, even if not publicly, the pro-referendum agitators into going home? Are these groups simply Moscow’s tools? Or are they—as suggested by a comment from the head of the “Donetsk People’s Republic” that his organization wouldn’t accept what was agreed on in Geneva—the tail that could wag the Russian dog? Will Vladimir Putin dispense with the rhetoric that calls into question the very fact of Ukrainian nationhood and dredges up revanchist formulations such as “Greater Russia”? Will Russia resort to force if the violence in eastern Ukraine escalates?

If the answers to these questions turn out to be the opposite of what we want, the Geneva effort will have failed. But the failure will not be the result of not having called Russia to account and isolated it at the talks.

Meanwhile, one of the most useful moves Europe and the United States can make is to extend Ukraine the credit it needs over the next two years to avoid default. Progress has been made on this front but not enough. Russia is one of Kyiv’s two major problems. Establishing economic stability is the other. When it comes to this task the West has a lot to offer, and little excuse not to offer it.

Rajan Menon is the Anne and Bernard Spitzer Professor of Political Science at the Colin Powell School, City College of New York/City University of New York, and Non-Resident Senior Fellow at the Atlantic Council.