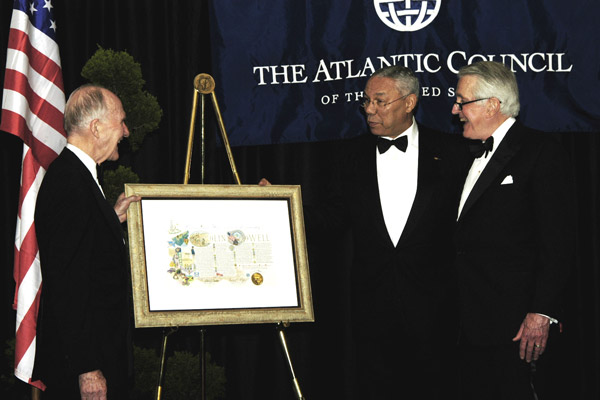 The 2005 award was presented to former Secretary of State Colin Powell in recognition of his leadership in shaping U.S. foreign and security policy over many years as National Security Adviser to the President, Chairman of the Joint Chiefs of Staff and Secretary of State, and the outstanding support he has given to the strengthening of U.S. alliances, especially the North Atlantic Alliance.

On April 27, 2005, under the chairmanship of Henry Catto, the Atlantic Council presented its ninth annual Award for Distinguished International Leadership to Colin L. Powell in recognition of his leadership in shaping U.S. foreign and security policy over many years as National Security Adviser to the President, Chairman of the Joint Chiefs of Staff and Secretary of State, and the outstanding support he has given for the strengthening of U.S. alliances, especially the North Atlantic Alliance.  Well over four hundred friends of the Council, including members of the House and Senate, Administration officials, senior U.S. and European military officers, diplomats, community and business leaders, members of the Council’s board of directors, and national councillors gathered at the Fairmont Hotel to honor Secretary Powell.

Brent Scowcroft, long-time Council director and former chairman, noted in his introduction that General Powell’s “endless hard work, wisdom, sagacity, integrity, and loyalty [have carried him to the] summit of power and prestige in America.”  In his remarks, General Powell noted that “America needs to make sure that it never allows the transatlantic link to weaken; it is the surest guarantee of the movement toward peace and freedom.”  Reflecting on the history of transatlantic relations and his personal experiences, he focused on the Cold War and NATO/U.S. success in competing with the Soviet Union.  He noted the key role of the Helsinki Accords in which the Soviets agreed to “respect human rights and fundamental freedoms, including the freedom of thought, conscience, religion or belief, for all without distinction as to race, sex, language or religion.”  In the end, authoritarian communism could not stand up to the open challenge of freedoms institutionalized by Helsinki. Powell also noted that, contrary to the expectation of many people that NATO would dissolve after the end of the Cold War, in fact many new nations have sought to become members.

Supporting one of the largest dinners in Council history, the generosity of numerous board members and corporate partners, particularly of the New York Life Insurance Company, enabled the Council, in the words of General Powell, to continue its “noble work that is [never] finished.”

About the Atlantic Council Leadership Awards:

Since 1996, the Atlantic Council has selected an outstanding individual to receive its annual Award for Distinguished International Leadership. These awards reflect the Council’s mission of promoting constructive U.S. international engagement by honoring individuals who have made major contributions to U.S. foreign policy and transatlantic relations.