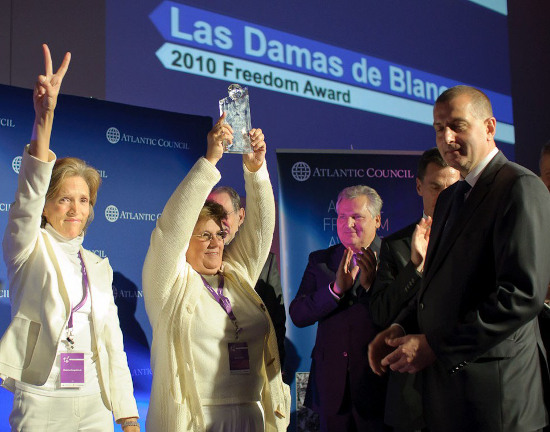 The Atlantic Council’s 2010 Freedom Awards Dinner was held on Thursday, October 7 in Wrocław, Poland, as part of the Wrocław Global Forum, marking the 30th anniversary of the founding of the Solidarity movement.

The dinner was attended by political, diplomatic, financial, and cultural leaders from around the world, including the Wrocław Global Forum participants. Freedom Awards were presented to individuals who have made a defining contribution to the struggle for freedom, including former Polish President Aleksander Kwaśniewski, European Parliament President Jerzy Buzek, and former NATO Secretary General and EU High Representative Javier Solana. In recognition that the struggle for freedom endures around the globe, we also honored the Ladies in White (Las Damas de Blanco) for their courageous call for freedom and human rights in Cuba.

Remarks at the 2010 Freedom Awards Dinner

Ladies in White, represented by Blanca Reyes, and introduction by Maciej Stasiński, with remarks by Jerzy Buzek