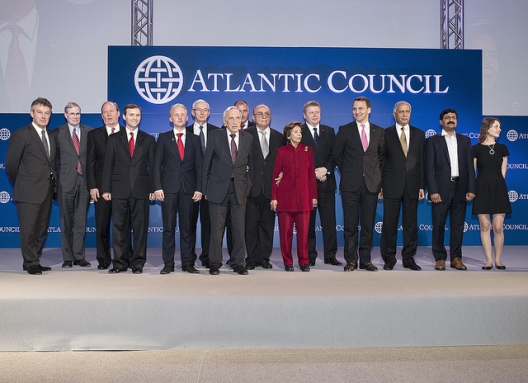 In 2013, the Atlantic Council recognized four exceptional individuals and organizations for their remarkable contributions to the fight for freedom and democracy around the world.

Recognizing Poland’s unique role in spreading the message of Solidarity and Freedom around the world, the Atlantic Council hosts its annual Freedom Awards Dinner in conjunction with the Wroclaw Global Forum.

In June 2013, the Atlantic Council honored H.E. Tadeusz Mazowiecki, former prime minister of Poland, for enacting landmark democratic reforms that transformed not only Poland, but also initiated a wave of change across the region. His dedication to the transformation of his country’s political system at such a crucial moment for the entire region has had an enduring impact on Poland’s modern history and continues to inspire leaders across the world today.

The European Humanities University was presented an award for its unwavering commitment to democracy in Belarus by providing Belarusian students with a free and democratic environment to pursue their education. The EHU’s award was accepted by Rector Anatoli Mikhailov, along with two current students of the University, to highlight the organization’s incredible impact on the country’s future leaders.

The Council also saluted Malala Yousafzai the young Pakistani activist whose courage to speak out against corruption and inequality, despite her own life being put at risk, is an inspiration to activists worldwide. The global response that her story has solicited is a testament to the critical role that activists have in fostering free and just societies worldwide. Malala accepted her award via video message and her father, Mr. Ziauddin Yousafzai, represented her at the Freedom Awards Dinner.

2013 also marked the advent of the Council’s inaugural Diplomat for Freedom Award presented posthumously to Mark Palmer, former US Ambassador to Hungary. His role in catalyzing the diplomatic breakthrough between the United States and Russia that ushered in a new era of democratization across Eastern Europe proved how diplomacy can be an active tool to animate the values of democracy and freedom.

Wroclaw, Poland is also the home of the Atlantic Council’s Wroclaw Global Forum.