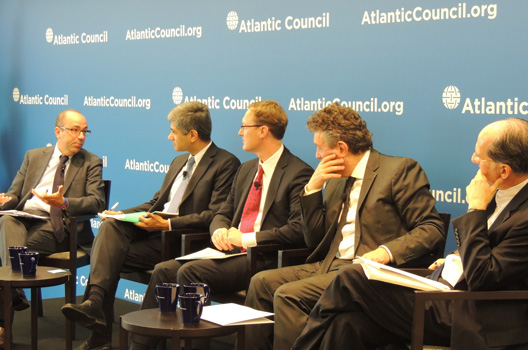 Aasim M. Husain, deputy director of the International Monetary Fund’s European Department, the ambassadors of Poland and Latvia, and other leading analysts discussed the Ukraine conflict and the economic transitions in Eastern Europe since the fall of the Berlin Wall during an Atlantic Council forum that served as the US debut of an IMF special report, 25 Years of Transition: Post-Communist Europe and the IMF.

A quarter-century after the fall of communism and a few years after the 2008 global financial crisis, former Communist states are again at a “crucial inflection point” as “developments in Ukraine, the legacy of corruption in Kyiv, and a return, unfortunately, to more authoritarian government in some of these former Communist countries now threatens to hinder or reverse political and economic progress,” said Daniel Price, member of the Atlantic Council board and managing director of Rock Creek Global Advisors.

The December 15 meeting marked the launch of the “Euro Growth Conversation Series,” a new component of the Atlantic Council’s Global Business and Economics Program, led by program director, Andrea Montanino.
As part of this series, economists, private sector leaders, and government officials from the US and Europe will discuss ways to foster growth in European economies.