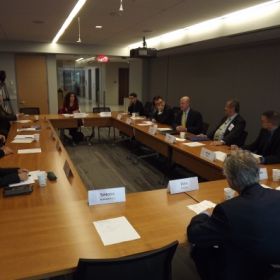 On October 7, the Atlantic Council’s Brent Scowcroft Center on International Security hosted an off-the-record strategy session with delegates from the US Mission to NATO and prominent members of international media outlets to discuss NATO’s future role in transatlantic and global security.

With US national security priorities shifting to the Asia-Pacific, the NATO Alliance faces a number of challenges regarding its traditional function. NATO faces numerous pressing political and budgetary obstacles which the new post-Cold War generation of leaders, who have begun to take the helm on both sides of the Atlantic, must overcome. Visionary NATO leadership, structural change, and public diplomacy will impact the Alliance’s future as US and European governments’ defense priorities diverge.

The event was part of a series of strategy sessions hosted by the Atlantic Council, aimed at shaping the agenda for the NATO 2014 summit and defining the strategic role of the Alliance as it transitions to a post-Afghanistan era.