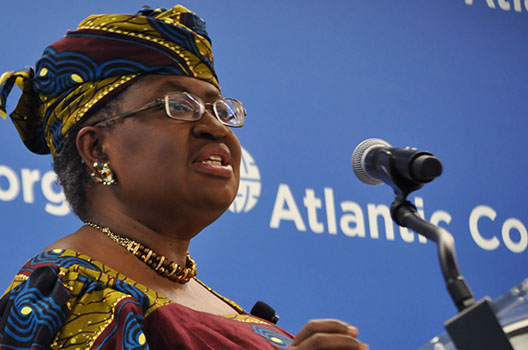 Nigeria is Africa’s largest economy and most populous country, with an economic growth rate that will land it among the world’s top 20 economies by 2030—if projections hold. That is an open question, as the country remains dogged by well-known security problems, growth and reform challenges, poverty, and other barriers to achieving its full growth potential.

On Wednesday, October 8, the Atlantic Council’s Africa Center, in partnership with Thomson Reuters, hosted a discussion with H.E. Ngozi Okonjo-Iweala, coordinating minister for the economy and minister of finance of the Federal Republic of Nigeria. Director J. Peter Pham welcomed attendees and provided context for the ensuing discussion. Brian Peccarelli, president of Thomson Reuters Tax and Accounting, also provided a brief introduction, in which he emphasized the importance of trade—bolstered by good governance and international assistance–to create sustainable growth and development in Nigeria. In particular, he highlighted partnerships between Nigerian firms and Thomson Reuters that have modernized and increased the transparency of the land registry process.

Okonjo-Iweala began her remarks by recounting the often remarkable progress that Africa countries have made over the past two decades, noting that Nigeria has been a major part of the “Africa rising” narrative. Though the bulk of Nigeria’s GDP is drawn from its natural resources, including petroleum, she pointed to other increasingly-robust sectors of the Nigerian economy as proof that the country has successfully transformed from a solely oil-based economy to a modern, diversified one worthy of more international investment.

She emphasized the importance of transparency in fostering good governance, and held up as one example Nigeria’s reformed land registry system that protects citizen and investor rights while also enhancing a favorable business climate. She noted that other parts of President Goodluck Jonathan’s transformation agenda include improving security, especially in the northeastern part of the country; implementing a thirty-year infrastructure plan; and overhauling the power sector through privatization and funds from the Obama administration’s Power Africa initiative.

But rising inequality, corruption, insecurity, and a lack of strong institutions and sound infrastructure remain serious obstacles to growth. Okonjo-Iweala also lamented the lack of long-term financing options for aspiring homeowners and small business owners, and acknowledged that reforms critical to improving the country’s human development indicators must be implemented more quickly.

After her prepared remarks, senior State Department correspondent Lesley Wroughton of Thomson Reuters moderated a discussion during which the minister answered questions and spoke about the promise of technology to help solve some of Nigeria’s most difficult problems; the value of democracy in promoting good governance; and the crucial role of civil society groups in holding government accountable and making it more transparent.