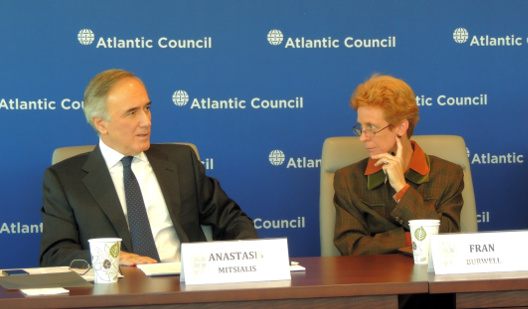 Roundtable discussion with Ambassador Anastasis Mitsialis, secretary-general of the Ministry of Foreign Affairs of Greece

On January 1, Greece will assume the rotating presidency of the Council of the European Union. The Atlantic Council’s Transatlantic Relations Program hosted Ambassador Anastasis Mitsialis, secretary-general of the Greek Ministry of Foreign Affairs, on Wednesday for a roundtable discussion on Greece’s priorities as it takes on the leadership role in 2014.

None can deny the significant economic and financial challenges that Greece has faced over the past few years. Official unemployment figures stand at 27 percent, but youth unemployment in Greece is closer to 60 percent, an unprecedented number.  The country has endured multiple bailouts and harsh austerity measures in an attempt to bring its deficit under control. Barely eighteen months ago, there was talk of Greece leaving the eurozone completely.

Ambassador Mitsialis hopes to use the Greek presidency of the EU as a way to move attention away from Greece’s individual domestic problems, and to use the lessons learned from the economic crisis as a tool for moving forward within the European framework.

In his remarks, the ambassador emphasized Greece’s main priorities for the upcoming presidency. First and foremost, in his eyes, is to continue to tackle the economic and financial crisis while safeguarding the success of the common currency.  Ambassador Mitsialis argued that the economic crisis, which has arguably affected Greece to a greater extent than any other EU member state, should be confronted as a European problem rather than a Greek one. The ambassador put to rest the notion that Greece would exit the euro under any circumstances. He stressed that although the euro is expensive for Greece, the common currency allows for a certain level of stability amongst member states that would not be possible without it.

Second, much as Lithuania utilized its presidency to highlight challenges in the neighborhood of Eastern and Central Europe, Greece will use its role to spotlight the challenges faced by the countries of Southern Europe in coordinating a common external border policy and responding to illegal migration flows.  The numbers of asylum seekers and migrants reaching European shores have increased dramatically since the escalation of the conflict in Syria.  Countries like Greece and Italy, which are located in close proximity to migrant producing countries of the Middle East and North Africa, have been placed under undue strain due to the Dublin II regulations requiring asylum seekers be returned to the original point of entry.  Ambassador Mitsialis urged the European Union to find a comprehensive solution to the migrant burden, possibly by taking into account GDP and population statistics in order to ensure that every country is able to effectively handle arriving migrants, no matter where they enter the European Union.

The ambassador suggested that one way Greece can take the lead on finding a solution to the problem of undocumented migration is to spearhead a European Union effort, possibly with the support of the United States, to produce incentives for net migrant producing countries to manage migration flows at the source.  For instance, the European Union could support initiatives to build coast guards so that countries can patrol their own waters.  Whatever the solution, it is evident that traditional methods of combating undocumented migration have been unsuccessful. When Greece recently erected a fence along its border with Turkey, for example, it only served to encourage attempts at crossing by sea, a more dangerous route than over land.

Ambassador Mitsialis also articulated the desire to address EU maritime policy during Greece’s presidency. The ambassador suggested that maritime policy would be a prime opportunity to collaborate more closely with Italy, as many of Greece’s maritime challenges are mirrored in Italy.

Finally, although not listed as an official priority by the Greek foreign office, the ambassador spoke of his hopes to champion the Transatlantic Trade and Investment Partnership (TTIP) negotiations between the United States and the EU, as there are two high level meetings on TTIP planned during the period of the Greek presidency.

In all efforts, Ambassador Mitsialis reiterated the need for close cooperation amongst the transatlantic community. The United States has had a favorable relationship with Greece for decades, going back as far as United States assistance to Greece while carrying out the Marshall Plan. Continued coordination between United States and EU officials during the Greek presidency will be key to a successful outcome on these far-reaching issues.