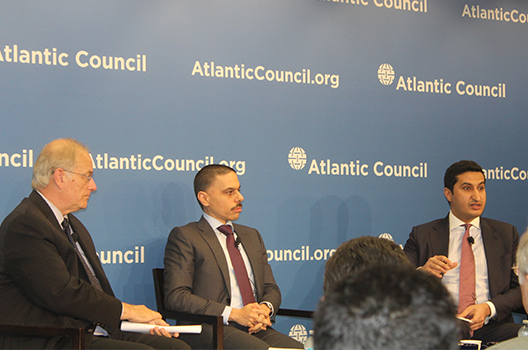 Hof began by discussing the importance of the Saudi-US relationship, which had been under stress recently. Furthermore, Hof recalled a quote from President Obama explaining that competition between Saudi Arabia and Iran has led to several proxy wars, and that there was a need to split Iranian and Saudi influence. Prince Faisal commented that Saudi Arabia and Iran have very different approaches to foreign policy and interests in the region, arguing that Saudi Arabia had adopted a purely defensive stance to foreign policy in the region. Following Hof’s remark on sectarian tensions between Iran and Saudi Arabia, Prince Faisal explained that tensions only escalated after Iran tried to export its revolution to the region.

Mohammed Alyahya explained that Saudi Arabia had always supported and followed US leadership on major foreign policy issues. He cited the example of Afghanistan in which Saudi Arabia aligned itself with the United States and armed fighters against the then-Soviet backed government. He concluded that it was unfair to place Iran and Saudi Arabia on the same level. Both panelists then commented on President-Elect Donald Trump’s potential relationship with Russia and the possible consequences for Saudi Arabia and the region. Alyahya explained that Trump had rejected the intelligence briefing on Russian involvement in Syria. Had he accepted it, he would have seen that Russian forces were not hitting the Islamic State of Iraq and al-Sham (ISIS) as much as he claimed. If Trump realizes this, he said, he would certainly adopt a different tone towards Syria. He indicated that Trump might be able to strike a deal with Putin and stop the massive killings of civilians.

Moving to Yemen, Prince Faisal explained that Saudi Arabia felt threatened after the Houthi revolt in northern Yemen, and was concerned about being surrounded by Iran-friendly actors. He asserted that this was the first conflict since 1960 in which Saudi Arabia played a leading role. He also excused the Saudi military for the number of civilians killed claiming that they were not used to fighting guerilla warfare. Alyahya clarified that Saudi Arabia had no choice but to fight in Yemen after the Houthis took Sana’a and set their sights on Aden. He also recalled aggressive rhetoric used by Iran and explained that while Americans could afford to disregard Iranian threats, Saudi Arabia could not due to its proximity with Iran.