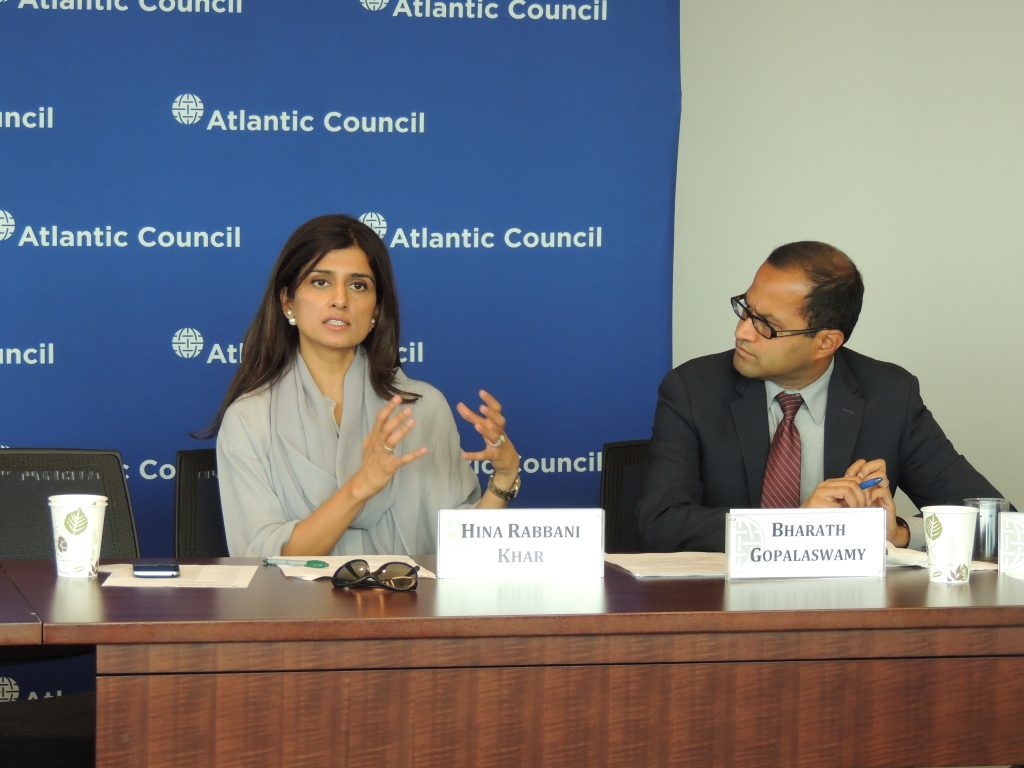 Speaking at an Atlantic Council briefing, Former Foreign Minister of Pakistan Her Excellency Hina Rabbani Khar offered her unique perspective on “the broad trends prevailing in Pakistan” including the recent talks between the Taliban and the Afghan government in Murree, the Iran deal impact in Pakistan, the status quo of Indo-Pak relations, and the state of Pakistan’s economy.

Calling the talks long overdue, Khar noted Pakistan would be “exceptionally dumb” if it did not directly engage in the negotiations between the Taliban and the Afghan government. Khar’s comments follow the culmination of talks held in Murree, Pakistan. The unexpectedly successful talks are likely to continue on July 30 in China with Pakistani representatives present. Khar insisted that the success of the first round was “great news” but claimed that Pakistan’s leverage over the Taliban is “greatly exaggerated.” While arguing Pakistan’s collusion with the Taliban is overstated, she simultaneously defended her country’s track record of supporting the Taliban. Khar suggested that “Pakistan is not alone” in empowering non-state actors, and referred to them as “Frankensteins.” Pakistan is currently in the throes of an internal struggle to remove the “apologists” and constrict the room for terrorists to operate within its borders. That program, Khar insists, is proceeding exceptionally well.

The ongoing program to reestablish legitimacy abroad is intimately connected to restoring the state’s monopoly of violence within its borders, according to Khar. Without such a monopoly, Khar asserted, “a state loses its credibility, such has happened with Pakistan.” The implications of such a loss are multifarious and varied. Not only does the economy suffer from its inability to attract investment, but the world community remains susceptible to Indian Pakistan-bashing. Pakistan-bashing is a viable political strategy in India because “people will believe the worst about Pakistan.” Khar suggested the same is not true in Pakistan.

On the current state of Indo-Pak relations, Khar proclaimed Pakistan’s receptivity to easing tensions. Unfortunately, “it takes two to tango,” and Prime Minister Modi’s “deliberate policy of exclusion” towards Pakistan ensures continued animosity and distrust. Analogizing policies and attitudes toward Iran and Pakistan, Khar insisted that exclusion and isolation is the wrong way to deal with an adversary. “It is much better to engage with the country,” she insisted, “and then behavior will change.” Unsurprisingly, Khar expressed her full support for the recent deal to curb Iran’s nuclear program.

Khar expressed hope that the Iran deal would catalyze the Iran-Pak gas pipeline project as well as Iranian investment in Pakistan’s energy sector. Investment, as opposed to aid, is the key to revitalizing Pakistan’s economy. “If you assist a country by aid, you debilitate the government by sending the message that it has already failed,” Khar insisted. “What Pakistan really wants is higher market access.”