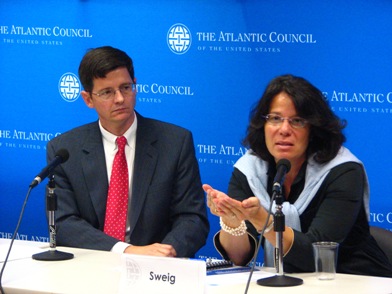 Calling for the lifting of U.S. sanctions against Cuba, The Atlantic Council of the United States presented “A Road Map for Reversing U.S. Relations with Cuba” on June 21st, 2007.Download the PDF

The latest issue brief offers 20 key recommendations to pull U.S.-Cuban relations out of a nearly half-century of deep freeze.

Produced by the Atlantic Council Working Group on Cuba including Atlantic Council resident senior fellow John Naland, Lexington Institute Vice President Philip Peters, and Julia Sweig, Director of Latin American Studies at the Council on Foreign Relations, the guide offers a new course for U.S. policy towards Cuba in order to re-engage the United States in effectively influencing events in Cuba for the mutual benefit of the citizens of both nations.

The U.S. government has sought to advance democratic and free-market change in Cuba for 47 years. Those efforts have failed…the time has come to chart a new course for U.S. policy towards Cuba. If the United States truly wants Cuba to embrace democracy, adopt a free market economy, and adhere to accepted standards for human and civil rights, then the United States must regain lost leverage with which to influence events on the island. To do so, it must begin by untangling a half century’s worth of legal and regulatory sanctions that block most diplomatic, commercial, and other relations with Cuba. The United States must engage the Cuban government in a dialogue that addresses common bilateral interests while encouraging positive change on the island. To chart this new course, the Atlantic Council Working Group on Cuba produced this road map for the initial restructuring of U.S.-Cuban relations.This policymaker’s guide offers 20 recommendations in six areas: sanctions, leverage, international support, migration, transnational threats, and property claims. The recommendations seek to pull U.S.-Cuban relations out of their nearly half-century of deep freeze in order to re-engage the U.S. in effectively influencing events in Cuba for the mutual benefit of the citizens of both nations.”