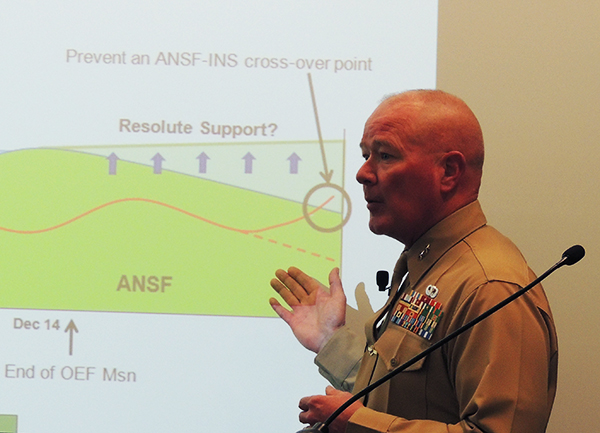 As the United States and its coalition partners plan for new roles in Afghanistan after 2014, many people in Washington and elsewhere are attempting to gauge the progress made. One of the untold stories of Afghanistan is how the coalition transformed Afghan National Security Forces (ANSF) into a fighting unit that could defeat the Taliban in key districts, built an Afghan National Army training facility and surgical medical center, all while cutting its footprint in Helmand Province by more than half. To discuss these developments, Major General W. Lee Miller, Jr., USMC, and Brigadier Paul Nanson, MBE, were joined by David Sedney, former deputy assistant secretary of defense for Afghanistan, Pakistan and Central Asia, in a panel discussion hosted by the Atlantic Council’s Brent Scowcroft Center on International Security on March 5, 2014.

The panelists assessed the challenges of transitioning combat and security operations to the ANSF and improving governance in the region while undergoing a reduction in forces and equipment amid uncertainties created by an unsigned Bilateral Security Agreement. The coalition forces have now shifted their focus to building the institutional capacities of the Afghan security forces and the local government, as well as strengthening the rule of law and key infrastructures in Helmand province. Further, the panelists highlighted the positive experiences that have not received much media attention, particularly the notable increase in girls’ education levels as well as the successful Helmand district elections last year.

However, the discussion also raised concerns over the fluctuating security situation and its impact on the upcoming presidential elections. In addition, the participants talked about the possible destabilizing effects of narcotics, criminality and cross-border flows of insurgents, pointing out that addressing these issues will require long-term commitment and a whole-of-government approach from the Afghan leadership.