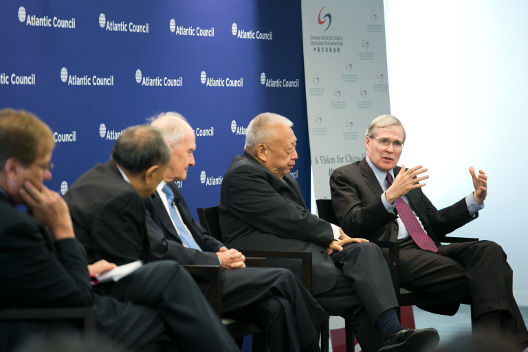 On September 17 the Atlantic Council’s Strategic Foresight Initiative hosted a distinguished panel discussion for the launch of the China-US Cooperation: Key to Global Future report, the culmination of a yearlong US-China Joint Assessment Project. For the project, the Atlantic Council’s Strategic Foresight Initiative, housed in the Brent Scowcroft Center on International Security, partnered with the China Institute of International Studies (CIIS) under the Chinese Foreign Ministry to engage in a joint assessment of long-term global trends and their implications for the China-United States relationship. This work was generously supported by the China-United States Exchange Foundation.

Mr. Hadley began the launch by commenting that neither the US nor China can solve global challenges alone, that cooperation will be critical to a prosperous future. These sentiments were echoed by Mr. Tung, who added the anecdote that eight US presidents and five generations of Chinese leaders have worked together since Nixon first went to China in 1972.

Ambassador Tiankai further emphasized the report’s conclusions, observing that although these global challenges are discussed in a future context the time is now to begin joining together to face them. Dr. Burrows outlined the challenges the United States and China face—reassessing the global power structure, rebalancing the global economy, and addressing a host of resource issues from water shortages to rising energy demands.

Mr. Zhaoxing made note of numerous parallels between Chinese and American history. He also emphasized that the two countries have much to learn from each other as they seek ever more common ground. Scowcroft noted that the US has two hundred years of history and China thousands. In this vein, General Scowcroft also commented on the difficulty of speaking across cultures—the US and China do not necessarily speak with the same context in mind. Viewing tension in terms of misunderstanding rather than disagreement opens avenues for cooperation and capitalization of areas of mutual interests.

All agreed that a new power relationship is emerging between the US and China and that as long as cooperation remains the dominant theme, the two nations can work through difficulties. Additionally, the panel recognized that the scope of global challenges—urbanization, diffusion of power, individual empowerment, stress on the global commons, climate change and more—demand a global response and that the US and China, working together, can help guide the world through difficult times ahead.