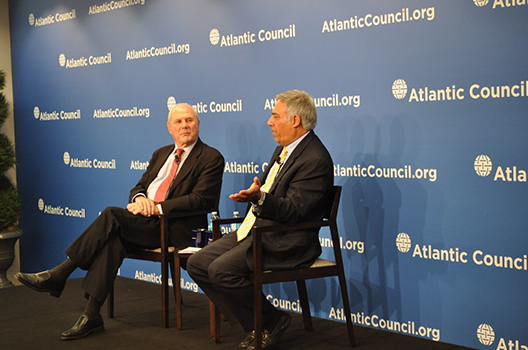 Discussion between Dr. Qayoumi and Dr. Starr during Atlantic Council’s event on Administering Reform in Afghanistan on November 4, 2016

On Friday, November 4, 2016, the South Asia Center hosted Afghan President Ashraf Ghani’s Chief Adviser Dr. M Humayon Qayoumi for a discussion on administering reform in Afghanistan. Following the introductory remarks from Dr. Bharath Gopalaswamy, the Director of the South Asia Center, Dr. Frederick Starr, the Founding Chairman of the Central Asia-Caucasus Institute, moderated a conversation with Dr. Qayoumi on the practical steps Afghanistan has made towards instituting vocational training for Afghan youth to tackle unemployment, developing major cities beside Kabul to diversify Afghanistan’s economy, and reversing the brain drain in the country by attracting Afghans with economic opportunity.