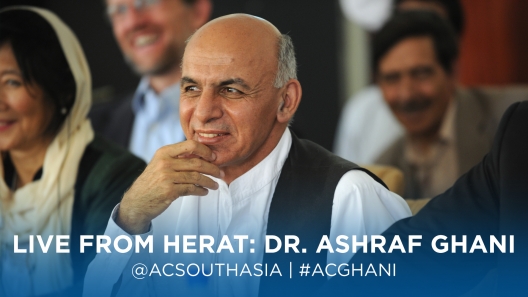 Ashraf Ghani, the former World Bank official who is one of two candidates in the June 14 presidential runoff election, said that President Obama’s West Point speech this week on foreign policy sharply compresses the time available for US troops to complete their mentoring of Afghan security forces.

President Obama’s “West Point speech telescopes a process” of US mentoring and training of Afghan forces “that previously we might have thought would take ten years” into a two-year period, Ghani said in an online discussion with the Atlantic Council. In diplomatic tones, he underscored the need for sharply focused work to accomplish a final Afghan takeover of all security-related duties in the country by Obama’s announced target date – the end of 2016.


Ghani offered a roadmap for addressing Afghanistan’s prostrate, war-sickened economy, and explained why some little-noticed social changes have improved Afghanistan’s potential to develop a vibrant democracy.

Ghani said Obama’s choice of a relatively fast, two-year final phase of the US military presence in Afghanistan is a parallel to the president’s 2009 order for a short, sharp surge in the numbers of US forces in Afghanistan to beat back what had been a broad advance by Taliban guerrillas.

“As somebody who managed” Afghan security planning with the United States during that surge, Ghani said, “I’m confident that this time again we will need a designed process that will allow us to focus on the imperatives of this partnership as they have been now defined by the president of the United States.”

As part of that partnership process, “I am committed to signing the Bilateral Security Agreement” with the United States – which Afghan President Hamid Karzai has refused to approve – “within the first week of taking the oath” of office, Ghani said. “Our national security forces need assurances” that they will get the continued international help that the agreement would bring, he told an audience of foreign policy specialsts, diplomats and journalists.

Ghani, spoke online from the western Afghan city of Herat, shortly before holding an election rally there. He finished second in the election’s first round on April 5, with 32 percent of the more than 7 million votes cast. Former Foreign Minister Abdullah Abdullah led in that round with about 45 percent of the votes. (The Atlantic Council has invited Abdullah also to hold an online discussion.)

“The elephant in the room is the economy,” Ghani said. Economic growth this year will be flat, following roughly 4 percent growth last year. Reforms, including an assault on corruption, still are needed to stimulate growth, he said. He laid out a broad plan including these priorities:

The short US time frame for withdrawing troops means that a peace process among Afghan political forces must assume center-stage, Ghani said.  Getting the cooperation of countries throughout the region will be critical. “I see a fundamental change in the government of Pakistan” that suggests a weakening of Pakistani support for violent extremists, including factions of the Taliban, that have fought for years against both India and Afghanistan, Ghani said. “We need to engage a ten-year process to turn Afghanistan and Pakistan into pillars of regional stability,” he said.

On the Promise of Afghan Democracy

Afghan society has been transformed in ways, some of them little noticed, that improve the prospects for building a working democracy, Ghani said. “The modern media has truly arrived in Afghanistan. … I have been dumbstruck by the extent to which the presidential debates were watched across the country,” leading to an unprecedented, nationwide public debate on Afghanistan’s future, he said.

“In the past five years, the formation of voluntary associations has been unprecedented” in Afghanistan, accelerating the development of a civil society that can help underpin democratic governance. With that, the start of “a process of national reconciliation has actually been achieved in practice.”

And the current election will advance a culture and an expectation of democratic rule, he said, when President Karzai becomes the first Afghan leader ever to voluntarily step down from power.