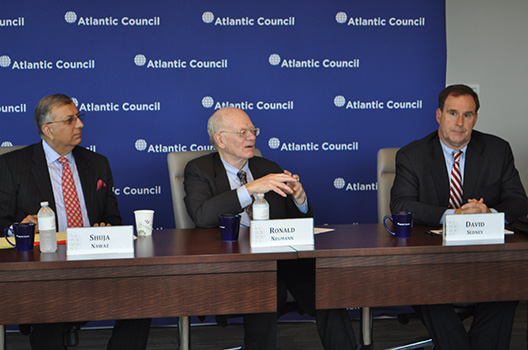 Amb. Ronald E. Neumann, former US ambassador to Afghanistan and President of the American Academy of Diplomacy and Mr. David S. Sedney, former deputy assistant secretary of defense for Afghanistan, Pakistan, and Central Asia, spoke at a South Asia Center roundtable about the fraud allegations surrounding Afghanistan’s presidential election and the resulting political impasse in the country. The speakers both urged that Afghanistan is not Iraq, citing clear differences in ethnic divisions and organizational structures, but teeters at the edge of a dangerous path similar to Iraq. Without a peaceful and stable transfer of political power, Afghanistan runs the risk of disrupting critical economic and security transitions.

Neumann argued that Afghanistan is “not a place where we are dealing with perfection,” suggesting that fraud is always expected at some level in the country, “but it must move in direction of democracy.” The important question is whether the alleged fraud in presidential elections occurred at a level that it would risk losing other progress made. At present, news reports appear to make judgments on the progress, or lack of thereof, in Afghanistan. Ambassador Neumann maintained that this approach is unhelpful because the time to assess the fighting will be later.

Sedney asserted that there needs to be a political and legal solution to the crisis in Afghanistan, but noted improvements in areas including health and the economy. Though normally optimistic, Sedney warned that all progress made thus far could be lost at the current “crisis point.” He urged that the core of sustaining gains does not rest in the army or other security apparatuses, but rather it’s political. The significance of political structures is illustrative in Iraq. “Government structures of Iraq failed to build a unified country capable of defending itself.”

However, Sedney and Neumann maintained that Afghanistan is not yet following the pattern of Iraq, but simply sits at a dangerous cusp. The United States will play a strong role in the path Afghanistan takes at this crisis point. Neumann concluded by stating the recently announced US withdrawal timeline is a “disastrously bad decision,” arguing we need flexibility.