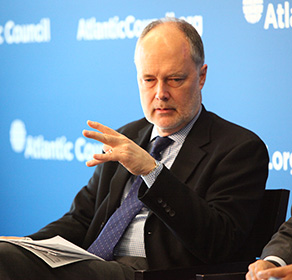 On October 16th, the Atlantic Council’s South Asia Center hosted a discussion with Shuja Nawaz, Distinguished Fellow at the South Asia Center at the Atlantic Council, and Vali Nasr, the Dean of John Hopkins Universality School of Advance International Studies. The panel, which was moderated by Ambassador James Cunningham, former Ambassador to Afghanistan and Senior Fellow and Khalilzad Chair, South Asia Center, touched upon the many facets of the Central and South Asia regions. The panel applauded President Obama’s recent announcement on maintaining a presence in Afghanistan as a significant step toward building confidence in the future of the Ghani government and the Afghan state.

The panel spoke of the ongoing concern in Pakistan over the dichotomy between the civilian government and the Pakistan military as the true base of power. While some of the failures in the region, the panel argued, could be blamed on Pakistan, a well-developed US strategy is essential for success in Afghanistan and the region. The risk of a US withdrawal in the future would cause Afghanistan to follow in the footsteps of Iraq.

Contrary to former President Karzai who chose to align with New Delhi, President Ghani’s initial conviction that he could improve relations with Islamabad is still seen as ambitious. In addition, the strengthening relationship between Pakistan vis-à-vis China, and India vis-à-vis the United States, indicates the need for continued support by the international community in Afghanistan.

The panel underlined the strong and increasingly important economic role that China plays in Pakistan through offering low cost loans to Pakistan for energy and other infrastructure development. Turning to Iran, the panel urged development of a dialogue between the US and Iran, particularly in light of the threat posed by ISIS to both Iran and Pakistan. In this “new version of the great game,” there is much room for economic growth and development for the region, starting with the China-Pakistan economic corridor.