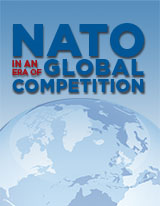 NATO in an Era of Global Competition

This eighteen-month effort, a joint project of the Atlantic Council and the Norwegian Institute for Defense Studies, aims to define the role of NATO and the broader transatlantic community in an era of emerging security challenges, global power shifts, and new disruptive technologies. The conference will convene leaders and experts from across Europe and North America to discuss the key report findings, including defining a new strategy for NATO, the impacts of the Ukraine crisis on NATO’s strategic calculus, and NATO’s future role in international security after the seminal 2014 Summit in Wales this September.