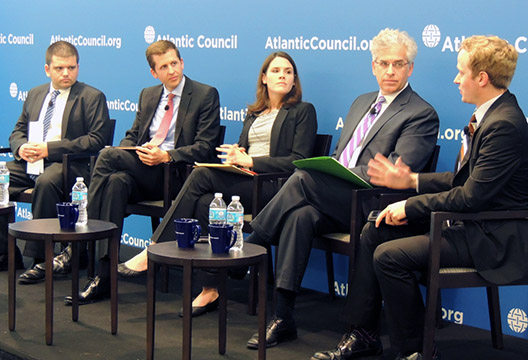 As recent events have shown, the United States must find a more effective way to operate in the 21st century. War roils in the Middle East; trade talks are faltering or reaching intractable sticking points; and fiscal uncertainty erodes America’s economic and military power. The issues of today, as well as developments that are meeting to create the world envisioned in the NIC’s Global Trends 2030 report, require the United States to rethink its strategy to wield its power more effectively in this and the coming world. To discuss how the US can both create and operationalize this new strategy, the Atlantic Council’s Brent Scowcroft Center on International Security assembled fresh and innovative thinkers who would provide interesting and new perspectives on the issue. Panelists included Council vice president Scowcroft Center director Barry Pavel; The Diplomat Associate Editor Zachary Keck; Jones Group International Senior Associate Jeff Lightfoot (who once served as Scowcroft Center deputy director); RAND Political Scientist Stacie Pettyjohn; and panel moderator John Hudson, staff writer for Foreign Policy.

Pavel began the conversation by claiming that the world is not changing, “the world has already changed.” He worried that as the world has changed, the US way of thinking of how to deal with the world has not. “Disruption is the new normal,” he said, and we need to let go of our post-World War II framework of stability Instead, “we need to adjust to the era we’re already in that will get even more complex, even more surprising, and even more disruptive.” Using the crisis in Ukraine as his example, he mentioned that the US should deal with the issue but in a way that does not anger the average Russian. “You don’t want to make the Russian people our enemy,” Pavel said, highlighting that a new strategy should take into account of the everyday citizen, even if that citizen lives within an adversary’s border. “The measures we take have to be precise, and I think we now have the ability to be precise with both military and with economic sanctions” against Russia.

Lightfoot believes that “American convening power and American leadership” can make a difference, especially in Europe today. Putin’s moves “shattered the illusions” that Russia was going to move into the West and now we see a geopolitical struggle between the transatlantic community and Moscow. Turning to how to deal with the world writ-large, however, Lightfoot mentioned that the US “tends to overinvest in capabilities because they are cost-free,” but the bubble eventually bursts like nuclear weapons did after the Eisenhower administration or counterinsurgency did after Afghanistan. He cautioned that a balanced assessment of the world as it is and the world that is coming is paramount and that the US should judiciously meet the requirements necessary to deal with those scenarios.

Pettyjohn suggested that the US overuses its military tool because it is perceived to be so great and that it “can solve all of the problems.” However, “there is a level of interconnection between commitments and following through on your promises,” she said. “Generally it’s a really bad policy if you say you’re going to do something, draw an explicit red line, then not do it. That is not the way any government should be creating policy.” Further, on the topic of the “pivot to Asia,” she mentioned that the US has not yet found a way to reassure allies and still alienate friends in other regions like the Middle East. However, “in reality the US is a global power” and its interests are everywhere. Thus, a US strategy will deal with the world as a whole and not commit itself to one region over others.

Keck discussed the latest US defense strategy and especially how it relates to Asia. The United States has focused more on “quality over quantity” as it develops or revamps capabilities in order to counter China’s “salami slicing strategy” in Asia. The United States will be challenged as regions with a great power players, like Asia, keep rising and must find a way to prepare for that scenario. Further, the “Asian policy industry” has been inflated by bureaucracies that try to justify their budget and news media that tries to sell a story.

The panel concluded that after seventy years, the world system after the Second World War needed to be reinvented. “We are living in a Westphalia Plus system, where, apart from states as a traditional player in the international system, there are non-state actors like the multinational corporations, religious groups, and individuals who have significant power.” In this new system there are new issues like the great biological capability developed in the Silicon Valley and the nonconventional threats regarding energy security or cybersecurity. As the leading power in the world, the United States needs to be aware and harness these threats and opportunities.

This event was part of the Scowcroft Center’s burgeoning work on US defense strategy. On May 14, the Scowcroft Center will have a full-day conference on a world where defense and security is disrupted by new technologies, with a keynote address by General Martin Dempsey, chairman of the Joint Chiefs of Staff.