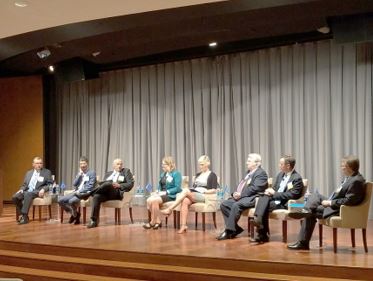 On July 6, 2017 the Atlantic Council co-hosted an event in partnership with the German American Chamber of Commerce of the Midwest in Chicago on the lessons European, and in particular German, apprenticeship and workforce development systems offer many valuable lessons to US companies, especially SMEs. Some of those included better workforce training, which can reduce shortages of skilled workers, boost manufacturing companies’ competitiveness, and revitalize regions that are grappling with the challenges from globalization.

Dr. Robin Mishra, Minister – Counselor and Head of Section Science and Technology at Embassy of the Federal Republic of Germany in the United States, presented the German apprenticeship system and offered ways of how to replicate its success in the United States. Jim Nelson, Vice President of the Illinois Manufacturers’ Association, outlined the existing skills gap that manufacturing companies in Illinois suffer from. Caroline Vicini, Deputy Head of the Delegation of the European Union, presented ongoing EU-wide efforts to improve apprenticeship systems to fight youth unemployment and the skills gap. Ambassador Earl Anthony Wayne, United States Career Ambassador and non-resident senior fellow at the Atlantic Council, provided a global perspective and laid out how US and the European economies can learn from each other. Freya Lemcke, Vice President of the Representative of German Industry and Trade (RGIT), moderated the panel discussion.