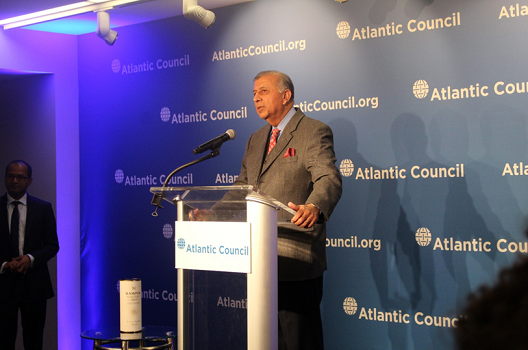 On Wednesday, January 9th, the Atlantic Council’s South Asia Center hosted a reception commemorating the Ten-Year anniversary of the Center. The occasion was marked by a ceremony honoring Shuja Nawaz, founding director of the South Asia Center and current Distinguished Fellow.

Bharath Gopalaswamy, Director of the South Asia Center, began the ceremony with welcoming remarks. Damon Wilson, Executive Vice President of the Atlantic Council, then offered his comments commemorating the tenth anniversary of the center and honoring Mr. Nawaz. The pair presented Mr. Nawaz with a token of appreciation for his substantial contributions to the South Asia Center as both a former director and current Distinguished Fellow.

The ceremony closed with a brief address by Shuja Nawaz, who expressed his continued optimism in the future of South Asia. As Mr. Nawaz reflected on the work of the South Asia Center, he noted the extensive track record of the Center facilitating Track-II Diplomacy between countries of the greater South Asia region, creating ground breaking scholarship, and fostering new initiatives to promote interconnectivity between the U.S. and South Asia. In a region so often defined by uncertainty, Mr. Nawaz praised the South Asia Center’s efforts to change this narrative and expressed his continued confidence in the Center’s ability to carry on the mission of “waging peace.”