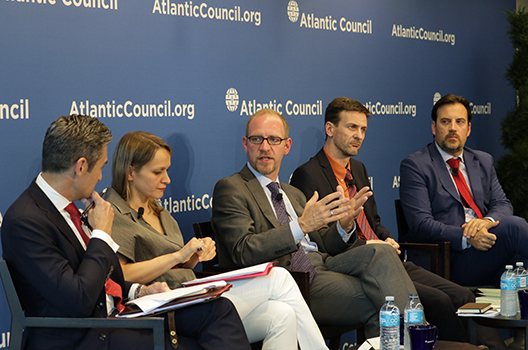 On May 16, the Atlantic Council’s Future Europe Initiative, in partnership with the European Fund for the Balkans, hosted a panel discussion on European perspectives regarding US engagement in the Balkans. Moderated by Damon Wilson, executive vice president of the Atlantic Council, and introduced by Igor Bandovic, senior programme manager at the European Fund for the Balkans, the panel included Dimitar Bechev, nonresident senior fellow at the Eurasia Center, Florian Bieber, director of the Centre for Southeast European Studies at the University of Graz, Milan Nic, nonresident senior fellow at the Future Europe Initiative, and Majda Ruge, fellow at the Foreign Policy Institute at Johns Hopkins University. The panelists discussed brewing political crises in the Balkans and potential roles the US could play in addressing these issues to ensure long-term peace and stability on the European continent. As Florian Bieber stated, “the EU has carrots and the US has sticks. We need to coordinate and use them.”