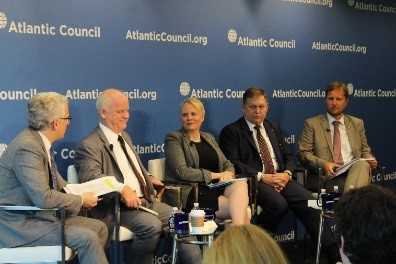 This panel discussion presented NATO’s frontline states of Estonia, Latvia, and Lithuania with a different approach to confront Russian aggression in the region. Dr. Hammes opened the discussion by going against the perennial quote from Thucydides “the strong do what they can, the weak suffer what they must”, and presented the eastern states with a solution to discourage Russia: utilize new technologies provided by the fourth industrial revolution. According to Dr. Hammes, the fourth revolution will indeed allow “deterrence through both denial and offense” through what he terms the “porcupine defense concept”. Dr. Hammes based his argument on six key assumptions, which were presented to the panel; first, that if a conflict occurs, there will be very little warning time; second, NATO forces will probably not be any larger than today; third, NATO nations will continue to disagree about whether the primary threat comes from Russia or mass migration; fourth, NATO will not be able to resist a Russian conventional aggression; fifth, reserve forces cannot be trained to react to a Russian conventional aggression due to lack of time and resources; and sixth, the frontline states are aware that some NATO nations will not respond.

To these assumptions, Dr. Hammes added what he thought to be the key problems in the region, for instance, Europe’s willingness and readiness.. Data gathered from polls have suggested that European Allies’ willingness to defend its Allies or themselves has decreased. The lack and division of operational resources and military capability of the west could also prevent it from being an efficient deterrent; as NATO states are unable to agree on the main threats, their forces are divided between the North and the South. In addition to internal disputes and complicated logistics, geography allows a fait accompli attack. Whereas Russian leaders are confident they could mobilize their forces in two days, it would take three to four months for NATO forces to deploy to the region. For these reasons, Dr. Hammes argues that new and updated technologies could provide with an affordable and efficient solution. 3D printing for example, would allow the creation of cheap, fast, drones quickly and at low cost. Small warheads carried by these drones could cause massive damage to Russian forces. New technology from the fourth industrial revolution would also allow the Baltic states’ forces to disperse widely and create too many targets for Russia. Baltic states could mobilize in hours instead of days, and if Western Europeans buy long-range cruise missiles, which are “cheaper and more survivable than air forces”, they could launch them from their own territory, partially solving the time-distance problem of deploying forces to the Baltic Sea region.

Thus, as Dr. Hammes argues, harnessing the emerging technology of the fourth revolution, instead of trying to update 20th century technology, could give a massive advantage to the Baltic states and eventually deter a Russian conventional threat.

Rolands Heniņš, defense counselor at the Embassy of Latvia to the United States, believes that this strategy would be relevant to Latvian’s policy, as “its main aim is deterrence and not offense”. He also argues that although Latvia “did improve its defense capacities” by reaching NATO’s 2% requirement for instance, 2% of the Latvian economy is different from 2% of the German economy. 3D manufactured drones could be a way to increase their defensive capabilities while waiting for Allied forces in case of a Russian aggression. Nevertheless, Allied forces from NATO would also need to increase their readiness in case of a Russian aggression, as Scowcroft Center nonresident senior fellow Kathleen McInnis advocated. She added that NATO’s main issue today, was the cost and burden-sharing issue, thus asking how this new strategy could fit in the burden sharing discussion to “normatively and morally reinforce NATO”. Richard Hooker, professor of national security strategy at the National Defense University, added that although Dr. Hammes’s strategy could indeed deter to a certain extent, it was not enough in the long term; Russia is simply too powerful to be stopped by drones and small warheads.

In conclusion, as Dr. Hammes argues, there is a lot that can be done to increase NATO capabilities, but the porcupine strategy is a novel operational concept that could help the Baltic’s deterrence and defend Allies wherever they may be. “Any bear can eat a porcupine, but they don’t.”