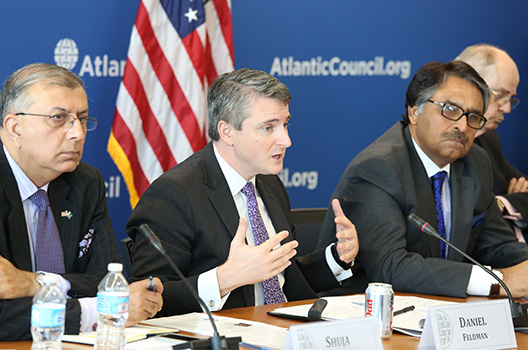 On October 14, the Atlantic Council’s South Asia hosted US Special Representative for Afghanistan and Pakistan Daniel Feldman and Ambassador of Pakistan to the United States Jalil Abbas Jilani for a briefing on the state of US-Pakistan relations. The briefing was a part of the US-Pakistan Conference, a track II effort to produce a continuous and sustainable conversation on the bilateral relationship. In their remarks, SRAP Feldman and His Excellency Jilani affirmed that the relationship between the US and Pakistan has significantly improved, despite negative rhetoric and media headlines. “This is a relationship that I am proud has grown significantly over last five years,” said SRAP Feldman. H.E. Jilani echoed these comments, stating “I am certainly witnessing a high in this relationship.”

Both speakers cited the evolving economic relationship between the United States and Pakistan as an example of improved relations. SRAP Feldman reported that a US investment in over 1000 kilometers of roads is helping boost the Pakistani economy. H.E. Jilani thanked the United States for its support of Pakistan’s hydro-electric development. Both speakers stressed the importance of Pakistan’s substantial participation in educational exchanges, such as the Fulbright program, which have been a critical bolster to the relationship.

The two urged that a stable Afghanistan was essential to Pakistan and the region’s security. H.E. Jilani linked regional stability to continued economic growth, suggesting a stable Afghanistan would have multiplying positive effects for the region. SRAP Feldman, citing long sessions with Afghanistan President Ashraf Ghani and Chief Executive Abdullah Abdullah, expressed confidence in a serious and realistic “potential for progress in relations between the two countries given this window of opportunity with a new government in Afghanistan.”

The remarks were welcomed with cautious optimism by US-Pakistan Conference participants, which included former defense secretaries, finance ministers, etc. Former Defense Secretary of Pakistan Tariq Ghazi provided a wary perspective from Pakistan, stating “I do not see a ground a swell of change in terms of public perceptions in both countries.”

The US-Pakistan Conference was part of the South Asia Center’s US Pakistan Program, funded by the Carnegie Corporation of New York. The Program was launched late last year with the goal of creating a regular forum on current and emerging issues in Pakistan and between the United States and Pakistan that would survive the ups and downs of the political relationship, with a view of three critical sectors: security, economy, and governance. A full report of the conference findings and recommendations will be released to US and Pakistani policymakers in November 2014.