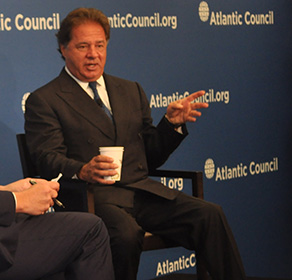 On April 15, 2015, the Atlantic Council Global Energy Center hosted Charif Souki, President, CEO, and Chairman of Cheniere Energy for a discussion on the impact of US energy on global markets.

Fred Kempe, President and CEO of the Atlantic Council, delivered opening remarks that highlighted the sweeping implications of the US unconventional oil and gas boom for global energy markets. He also noted that Mr. Souki, perhaps more than anyone else, took advantage of the unconventional revolution in its early stages to propel Cheniere Energy to the forefront of the American energy world.

In his remarks, Souki said that his company is situated in a market that has to make investments for 40 years in an industry that can change dramatically within 5 years. He noted that the United States has been so successful at drilling for gas that the market is awash with it, but that there is room for gains in efficiency with respect to drilling for crude oil.

Souki stressed the need for companies like Cheniere Energy to be extremely nimble in the today’s world of price volatility in energy markets. He also noted that the US oil and gas industry has demonstrated an ability to react to market changes with unprecedented quickness. Given the uncertainty of oil and gas markets going forward, Souki said that adaptability is the key to survival and success.

Souki also lauded the Department of Energy for the steps that they have taken on American LNG exports. Souki said that he envisions a future where, once DOE requirements are met, most restrictions on LNG exports will be removed. With regard the ongoing US ban on crude oil exports, Souki argued that the ban was unsustainable, counterproductive, and likely to be overturned in the coming years.

Souki closed his remarks by stating we probably will not see huge and immediate market changes due to new technology, but are more likely to see incremental improvements will shape the market in the future. Finally, he strongly emphasized the importance of allowing the free market to determine the future of hydrocarbon exports.