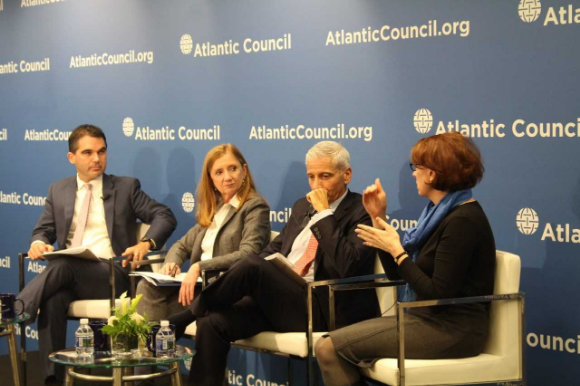 On December 3, 2018, the Atlantic Council’s Adrienne Arsht Latin America Center gathered distinguished experts to discuss the US-China trade-and-investment relationship. It was the purpose of this forum to rigorously analyze and at times debate the tenuous relationship between the world’s two largest economies and formally introduce the report China-Latin America Trade at a Moment of Uncertainty: What Lies Ahead in 2019?, an Atlantic Council publication authored by Anabel González, former Costa Rican minister of trade and the World Bank’s former senior director of Global Practice on Trade and Competitiveness.

Monica Macia kicked off the morning’s events outlining the context and significance of US-China trade relations, as well as its subsequent impact on the world economy. Macia made clear that the escalation of political and economic tensions between the US and China would have tangible effects on the entirety of the Western Hemisphere, in particular Latin America.

Macia stated, “I am confident that the report provides an important point of reference for thinking about the changing nature of the trade and investments dynamics of China and Latin America and understand the resulting implications.”

Macia also expressed her strong belief that a robust and competitive Chinese economy would galvanize world economic competition and advance technological and trade innovation. She underscored China’s blossoming relationship with Latin America: “Latin America and China have built strong ties for the last two decades, in fact trade between the two regions has multiplied eighteen times since 2000.” This critical relationship between China and Latin America has resulted in China being the largest trading partner for Argentina, Brazil, Chile, and Peru, as well as the region’s second-largest trading partner.

Anabel González began her presentation of her report China-Latin America Trade at a Moment of Uncertainty: What Lies Ahead in 2019? by warning that a US-China trade war would lead to numerous consequences for Latin American economies

González stated, “six of China’s main trading partners to Latin America are in resource-rich South America, where exports to China are concentrated in four products which represent 75% of Latin America exports to China.” Chinese foreign direct investment has also surged in the past decade. Between 2005-2016 China invested close to $90 billion in the Latin American region.

Marczak commenced the first panel focusing on the aftermath and implications of the recently concluded G20 Summit meeting in Argentina. Prescott, who joined González for the keynote conversation, noted the G20 to be a brief reprieve of economic and political tension between the United States and China stating, “A truce has come out of this meeting, and the United States and China have agreed, at least for the moment to step back from the brink of further deepening the trade war that I think is fair to say we are already in, by the US agreeing not to increase the tariffs or add new tariffs.”

Although hopeful, Prescott made clear that no concrete agreements, steps, nor measures were cemented during the G20, a lack of clarity that has characterized the US-China relationship for the past several years. Focusing on the US-China trade relationship González cited three critical tenets of the report predictive of future trade behavior: 1) the US and Chine will enter a trade war; 2) the US and China will agree upon a stipulated bargain or deal; 3) uncertainty and miscommunication between the US and China will continue. Prescott explained how uncertainty may actually be a diplomatic strategy utilized by the Trump administration in an attempt to gain leverage.

For the final panel, Ennis and Sansone joined González for a discussion about the report’s findings and sticky issues surrounding the China-Latin America commercial relationship. Marczak started the conversation asking for reactions of the Trump-Xi meeting at the G20. Ennis analyzed the interaction with cautious optimism stating, “What we saw come out of those meetings is probably the best-case scenario of what could have come out of an agreement to not escalate, but it’s hard to escape the fact that we still got $267 billion dollars’ worth of tariffs on imports into the United States from China and China has retaliatory tariffs on about 85% of US exports.”

Sansone expressed an optimistic view of the situation maintaining the opinion that China is committed to further opening their economy. González made clear that for a successful partnership to be forged between China and Latin America, Latin American countries need to take an active role in negotiations as to ensure fairness and equity of trading practices.

Marczak then moved the conversation to the response of Latin American countries towards the dichotomy of US and China investment strategies. Ennis explained that the majority of Latin American countries would embrace US or Chinese investment regardless of the investment structure or philosophy. Sansone added that China, in negotiation with the US Treasury, announced the launch of a US clearing hub to increase monetary liquidity and facilitate ease of investment. González concurred with Sansone, predicting Chinese infrastructure, venture capitalism, and e-commerce to become increasingly significant in Latin America. Sansone pointed out that China was in the midst of transforming from a manufacturing society to a service society.

González emphasized that for Latin American countries to succeed they must shift from a commodity mindset to a productivity mindset, a principle espoused by Chile.

She stated, “If you look at the exports of fruits coming out of Chile they are growing significantly every year. I mentioned the case of cherries where Chile, a country that has seventeen million people now supplies seventy percent, seven zero, of the imports that China does of cherries.”

Ennis added that China has made clear that it is interested in bilateral agreements with governments around the world. Sansone concluded the discussion making clear that China recently examined the adoption of competitive neutrality in state owned enterprises and is willing to adopt the principles of competitive neutrality as dictated by the Organization for Economic Co-operation and Development (OECD).