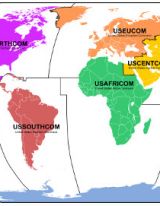 The fourth meeting of the Combatant Commands Task Force focused on specific restructuring options for the realigned COCOMs. Participants discussed the need for stronger interagency cooperation and improved regional knowledge to enhance the efficiency and effectiveness of regional US security cooperation efforts. In addition, the task force considered possible changes in the core functions of the commands to better meet the challenges of the 21st century, including not only traditional armed conflicts but also natural disasters and humanitarian crises.

A final report on the task force’s recommendations for COCOM restructuring is due to be published in the spring. The Task Force underscores the broader work the Brent Scowcroft Center is doing in analyzing the US and its defense priorities and strategy in the coming world as outlined in the Global Trends 2030 report.

About the COCOM Task Force
Unified Combatant Commands (UCCs or COCOMs) were created after World War II as a way to organize and streamline United States military engagement around the world. Nine COCOMs currently exist—six based on geographic regions while the remaining three are functionally oriented. The Atlantic Council’s Brent Scowcroft Center on International Security formed the Combatant Commands Task Force to explore potential realignment and its effect on the American people, military, and global presence.