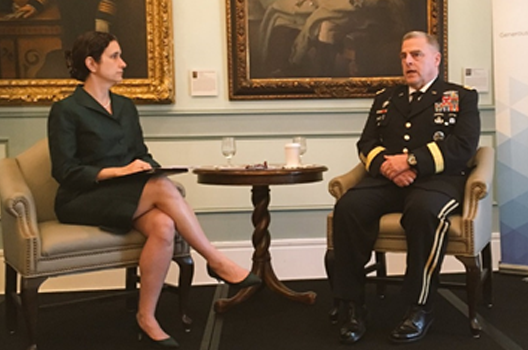 On May 4, the Atlantic Council’s Brent Scowcroft Center for International Security hosted Chief of Staff of the Army General Mark Milley at the Army and Navy Club on Farragut Square in downtown Washington DC. Dr. Nora Bensahel interviewed General Milley after his opening statements and a welcome by former Secretary of the Army John McHugh and Saab North America Executive Vice President Dr. Joseph Evans. The interview featured a wide range of topics which he provided his unique perspective and humorous as well as serious thoughts. This event is a part of the Commander Series – the Atlantic Council’s flagship speakers’ forum for senior military leaders. The series provides a platform to discuss current strategic issues with an impressive audience drawn from across Washington’s policy community, including think tanks, media, industry, embassies, and the US government.

A full video of the event can be found here:

Image: General Milley, Chief of Staff of the US Army, discusses the future of the Army and the force’s preparedness to face twenty-first century challenges with Atlantic Council Senior Fellow Dr. Nora Bensahel at the Army and Navy Club on Farragut Square.