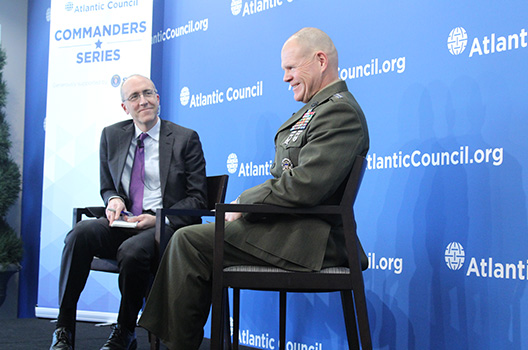 General Neller discussed the current state and the future of the US Marine Corps, given a rapidly changing and turbulent global security environment. Called an “innovative strategist” by Secretary of Defense Ash Carter, General Neller outlined his priorities for the Marine Corps and discussed how the service can help the United States achieve its strategic defense objectives.

General Robert B. Neller assumed the duties of Commandant of the Marine Corps on September 24, 2015. He has served as an infantry officer at all levels. He commanded the Marine Security Force Company Panama during Operations JUST CAUSE and PROMOTE LIBERTY and the 3rd Light Armored Infantry Battalion during Operation RESTORE HOPE in Somalia. Neller was also in the Policy Division of Supreme Headquarters Allied Powers Europe and was the Director of Operations of the Joint Staff.