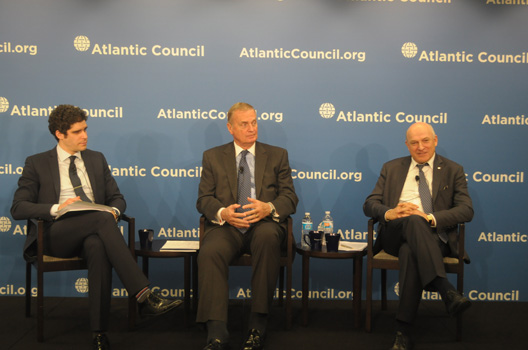 On April 9, the Atlantic Council’s Dinu Patriciu Eurasia Center hosted a panel discussion on the Washington DC release of Completing Europe: From the North-South Corridor to Energy, Transportation, and Telecommunications Union report, co-authored by the Atlantic Council and Central Europe Energy Partners (CEEP).

Pawel Olechnowicz, Chairman of the Board of Directors at CEEP, highlighted the need to further strengthening the Trans-Atlantic bond. The need to further integrate Europe is paramount now, due to the aggression by Russia in Ukraine’s east. Mr. Olechnowicz mentioned how European Union (EU) members in the Eastern and Central Europe are much more prone to Russian politicking and energy pressure, and are in critical need for better connections to the more robust economies of the West. This would also have the advantage of further developing the psychological bond of Europe, in which the EU sees all members are being critical and connected members of the bloc.

General James Jones, former National Security Advisor and President at Jones Group International, presented the idea that the North-South Corridor would solve many issues facing Europe today. He acknowledged the enormity of scale and difficulty in implementing such a grandiose concept, but stressed its importance for the future stability and prosperity of the continent. General Jones believes that strengthening the bonds of the alliance and the EU would help to weather the new tools of economic and informational warfare in the 21st century. He explained that by helping Europe to share its energy sources and be better integrated, the bloc could better respond to Russian or other pressures. He finished his remarks by concluding that having a robust and unified Europe would set the example for the next century, that energy and economics are the building blocks of cooperation and partnerships, not weapons to be used against other state.

In the moderated discussion, Atlantic Council’s Eurasian Energy Futures Initiative Director, David Koranyi, proposed the question of where Europe might get its gas supplies from besides Russia. Mr. Olechnowicz and General Jones believed that the United States could and should be one of the main suppliers. General Jones remarked that the US needs to work on modernizing trade and export laws first in order to make such plans feasible. Mr. Olechnowicz also brought up the possibility of further developing indigenous European sources of energy, such as shale, coal, nuclear, and in time, renewables. Mr. Koranyi concluded with the talk that the main goal is not to cut out Russian gas all together, but to make an even playing field for energy resources, in which energy is not used as a tool of coercion. The Council’s President and CEO, Frederick Kempe, made welcoming remarks.