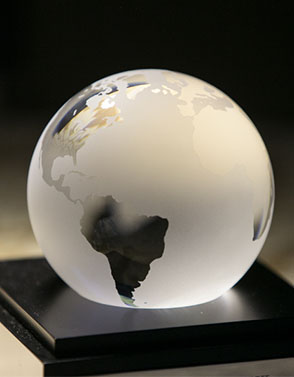 The Atlantic Council presented its 2014 Distinguished Leadership Awards April 30 before an audience of more than 900 US and international foreign policy and business leaders. The annual awards celebrate people and institutions that make extraordinary contributions to building transatlantic relations. Opening the ceremony for the first time, following his appointment in January, was the Atlantic Council chairman, Governor Jon Huntsman. Especially in light of Russia’s annexation of Crimea and its attacks on Ukraine, he noted:

“The critical importance of the Atlantic Council’s 21st-century mission could not be more clear. Whichever challenge to our planet of 7 billion we may consider – whether it is global warming, or human or economic development; whether it is the security of our energy, of food, of cyberspace, or of nations – the building of solutions still rests heavily on that same strong foundation, that transatlantic community of purpose, that has been the Atlantic Council’s central focus since its creation 53 years ago.”

Huntsman and – via a videotaped message – German Chancellor Angela Merkel then introduced and honored European Commission President José Manuel Barroso with the Distinguished International Leadership award, recognizing his dedication to the cause of European integration and ensuring that the benefits of that integration—stability, prosperity, and democracy—reach across an ever-widening Europe.​

Barroso, a former Portuguese prime minister who soon will finish serving his second term as president of the European Commission, spoke of the European Union’s growth – to 28 member states – during his years in office. He noted that the EU’s prospects for success were questioned for years by critics on both sides of the Atlantic. But, he said, “Those who preached the decline of Europe are wrong.” Barroso declared that the “European Union is strongly committed to supporting the people of Ukraine” in their campaigns to battle corruption and build a more democratic government with hopes of joining the EU. In their peaceful protests at Kyiv’s Maidan this past winter, “they showed that they belong emotionally, culturally, politically, to Europe,” he said.

Then former Alabama Governor Bob Riley introduced the CEO of Airbus Group, Tom Enders, and presented him with the Distinguished Business Leadership award. Enders’ commitment to bringing a European multinational corporation to build aircraft in the United States has been of immense importance to Alabama and the entire Gulf Coast of the United States, Riley said, marking “our groundbreaking entry into the global aerospace industry.” Riley described Enders as a committed Atlanticist and a visionary business executive who has not only built Airbus into one of the world’s leading aerospace companies, but also has provided invaluable support to humanitarian organizations such as the International Committee of the Red Cross.

Enders recalled Riley’s gift of a brass reproduction of Frederick Remington’s sculpture of a western cowboy busting a bronco with the legend “Never Let Go” – thanking Alabama leaders and his American employees for their roles in building Airbus Group’s US investment. He introduced Linda Taylor, a senior manufacturing engineer with Airbus’ US operations who pursued her advanced aeronautical engineering studies while attending to a daughter with a serious, two-year-long illness. He voiced gratitude to other honorees and all those “who never let go of the ties we have built and that we have to strengthen across the Atlantic – be it for trade, for defense, or for promoting the cause of human rights and democracy.”

Ruslana appealed for international support for Ukraine’s battle to keep its independence, despite Russia’s seizure of Crimea and the Russian-backed violence in eastern Ukraine.  She urged the event’s attendees to pick up the hundreds of flashlights distributed around the tables in the ballroom. The room’s lights were dimmed, and the gathering switched on the flashlights, as crowds at the Maidan did over the winter to show their support for a free and democratic Ukraine. The melody of Ukraine’s national anthem swelled, and as Ruslana sang it, the hundreds of US and European foreign policy and business leaders rose from their seats, their flashlights raised.

“I’m proud to report that the men and women of ISAF are doing well” as they work – amid critical Afghan national elections this year – to transfer security responsibilities in country to Afghanistan’s own forces, Dunford said. Representing Dunford at the ceremony were Marine Sergeant Major James Booker and ISAF colleagues from the British, Canadian, and French contingents in Afghanistan, all of whom received a standing ovation from the audience.

The third former national security advisor of the night, retired General Brent Scowcroft, presented the award for Distinguished International Leadership to US Secretary of Defense Chuck Hagel, saying that Hagel’s career has reflected “a recurrent theme – an exceptional devotion to America … and its leadership in the world.” He recalled Hagel’s service as an Army infantry sergeant in Vietnam, where his courage in combat was reflected in his twice being awarded the Purple Heart. Scowcroft noted as well Hagel’s leadership as CEO of the United Service Organizations (USO), for twelve years in the US Senate, and as chairman, from 2009 to 2013, of the Atlantic Council.

Hagel expressed gratitude for the US military personnel whom he leads, and for their partners from allied nations. “Alliances … have been anchors, and I know of no anchor of security more important to keeping peace in the world since World War II than NATO – the transatlantic alliance,” he said. “When we take some inventory of where we’ve come from in our lifetimes – no World War III, no dimension even close to the first fifty years of the 20th century, no nuclear exchange … overall it’s been a pretty successful last sixty years because of this alliance.” He added: “If there was ever a time in history where we had the tools, where we had the capacity, where we had the institutions to engage and fix the problems, it is now.”