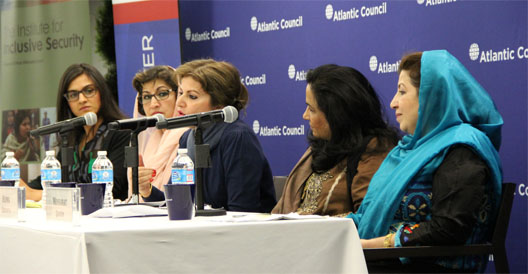 Why Women Must Have a Role

“The greatest predictor of security and stability in a country is actually not wealth and it’s not the level of democracy. It is how well the women are treated,” said The Hon. Swanee Hunt at a panel hosted the by the Atlantic Council’s South Asia Center and the Institute of Inclusive Security on April 2. Hunt introduced a panel of four women leaders from Pakistan who are working to counter the growing threat of violent extremism in the country: Huma Chughtai, gender and police reform expert; Shaista Pervaiz, member of the National Assembly, Pakistan Muslim League – Nawaz; Mossarat Qadeem, executive director, PAIMAN Alumni Trust; and Nuzhat Sadiq, member of the Senate, Pakistan Muslim League – Nawaz.These women represent a microcosm of the increasing number of women expressing themselves in the nation’s fight against terror, which has claimed the lives of more than 40,000 Pakistani civilians.

Rather than simply emphasizing the need for financial assistance, the panelists were adamant that while financial resources are necessary, more pressing are the practical measures required to engage women in countering violent extremism. Qadeem echoed her fellow panelists’ sentiments by asserting that women need to be given a central role in the strategic dialogue taking place, not only between the United States and Pakistan, but also between Pakistan and the Taliban. Aware of the constraints of having women ‘at the table’ in any potential peace talks between the Taliban and the Nawaz Sharif government, Sadiq championed the passing of legislation earlier in the year which ensures “the protection of women and minority rights under any peace framework in the tribal areas”. As such, Sadiq remains confident that a gender-based women’s perspective will play a role despite the lack of direct female representation in the talks. Citing a 2008 report, the Senator brought to light the fact that women in the National Assembly outperformed men and was echoed by a member of the audience who contended that, “the way we team up with our women parliamentarians across parties is incredible” insisting that Pakistan can serve as a model to other countries.

Women in Pakistan, the panelists expressed, have a unique role in countering extremism. Qadeem revealed how “most of the mothers of extremists were in the opinion that their sons have done nothing wrong and were innocent.” The realization that mothers need to be educated and be given the resources and faculty to, “start asking the critical questions,” is at the core of the panelist’s argument. Mothers have a profound influence, provided they are given the confidence and the critical thinking skills to ask questions and notice indicators of changes. An excellent case in point, as one panelist pointed out, was the innovative and indigenous model that successfully transformed 455 young boys who were either extremists or on the verge of extremism. By approaching the issue through the agency of mothers, the panelists believed that they increased their effectiveness in addressing violent terrorism. Mothers, Qadeem claimed, were instrumental to this success and could create a multiplier effect to impact and educate others.