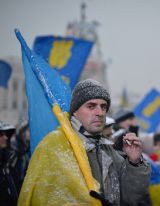 While much of the discussion in the West on responding to the crisis in Ukraine has been about targeted sanctions against Russian oligarchs and the oil industry, the latest developments in Crimea have turned the situation in a more militaristic direction. Recently, Russian troops seized a military hospital in Simferopol along with a missile base in Crimea. Russian forces also infiltrated an air base in Novofedorivka and took up position along a runway and moved onto a Ukrainian base used by a motorized battalion in Bakhchysaray. As diplomacy between the United States and Russia has broken down, evidenced by the ongoing back-and-forth between US Secretary of State John Kerry and Russian Foreign Minister Sergey Lavrov, Russian actions continue unchecked in the Crimea.

With these new developments, serious thinking has to be done regarding a political-military strategy not only to deter further Russian action in Crimea, but also to deter Putin from seeking to move further West into Ukraine. To do just that, the Atlantic Council hosted a members’ conference call with two former under secretaries of defense for policy: Amb. Eric S. Edelman and the Hon. Walter B. Slocombe. The call was moderated by Atlantic Council Vice President and Director of the Brent Scowcroft Center on International Security Barry Pavel.

Both speakers outlined specific measures the United States could take with allies and partners to respond more forcefully to Russia’s incursion into Ukraine. Edelman, outlining his recent article in the Weekly Standard, claimed that military costs to Russia could be raised and “that has nothing to do with putting US boots on the ground in Crimea or Ukraine—that’s not going to happen.” These proposed options, however, might “change Putin’s calculus.” Edelman’s options included: reinforcing Baltic air defense; increasing F-16 training missions in Poland and making those planes capable of carrying NATO nuclear weapons; utilizing the NATO-Ukraine Commission more often; and increasing military assistance to Ukraine. Indeed, Edelman believes that the diplomatic solutions sought by the United States will not be accepted by Russia without being backed up by the credible use of military force. In essence, the West should make the option of grabbing Ukraine worse for Russia than letting it go.

Slocombe believes that all Western measures taken should have the “general support” of NATO, but “the time is coming rapidly when [it] will have to take some robust and courageous decisions.” In the meantime, the real way to hurt Russia is not via sanctions, but by “promoting a successful Ukraine.”  It is easier to persuade friends and allies to act as one to help Ukraine than to persuade Putin to stop harming it, says Slocombe. Further, should a war break out between Russia and Ukraine, Russia would eventually win since the Ukrainian military has more problems than the Russian military. “It’s not just a matter of numbers,” he says, but rather that “the Ukrainian military has been badly underinvested in terms of equipment and training.” Finally, Slocombe mentioned that he is unsure that there is “support within the Alliance for a military commitment to Ukraine” because Ukraine is not a NATO member.