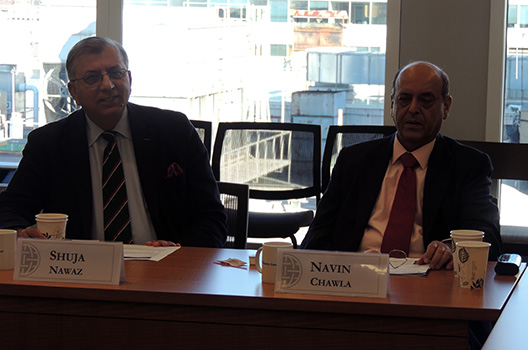 With the world’s largest democracy and a population of 1.3 billion, elections in India are among the most complex democratic exercises in the world. Navin Chawla, former election commissioner of India, spoke to the Atlantic Council about how a country of 814 million registered voters maintains an efficient and universally respected election process and peaceful transitions of power.

The Election Commission in India possesses enormous power to act autonomously and conduct elections through the country’s constitution. The country requires 8,000 polling stations and 8 million people to execute a secure process, with both domestic and international police deployed by the Election Commission.

India has “a very strange way of conducting elections,” said Chawla, describing how the Commission takes complete control of governance throughout the country during the election. Local government officials, selected ahead of time, are appointed by the Election Commission for a five-year term, being called up to help as needed. Local government officials help with staffing electoral preparation, executing the vote, and the official tally process. The Election Commission also co-opts the entire school facility network across India, for the purpose of housing polling stations and office space for election personnel –meaning most elections are held in January or April to avoid school examination periods.

Strengths and Weaknesses of India’s Process

Chawla expressed that processes have improved with each passing election. Over the last 67 years, every local and national\ election has been held on-time with an orderly transition of power to follow. Chawla attributed this to India’s first prime minister, Jawaharlal Nehru, who played a stabilizing role to launch the democracy. Nehru’s leadership “fostered a tradition of deep appreciation and respect of the electoral process and outcomes.”

Yet, India’s elections process is not perfect. Chawla raised the concern of increasing linkages of wealth and office, stating “it now takes very big money to enter parliament” and warning that candidates are spending illegal money. “If the person has spent that much money, is it really reflective of the population?” Further, sixteen percent of sitting parliamentarians currently have criminal charges pending against them. “Criminality and money are really the things that are starting to go wrong.”

Despite these challenges, India’s election process remains a model for the region and world. India has been able to solidify the basic institutions of governance, including three equal branches of government, a Supreme Court, and a responsive and independent election commission that successfully executes elections and peaceful transfers of power.