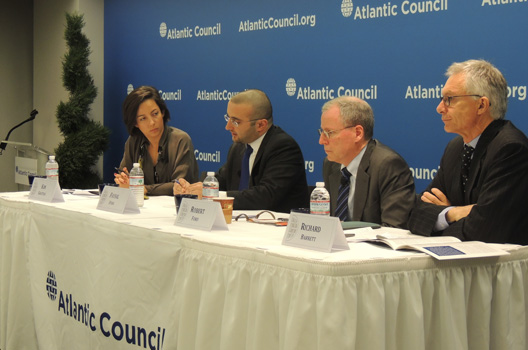 On Tuesday, April 28, 2015, the Atlantic Council’s Rafik Hariri Center for the Middle East released Fellow Faysal Itani’s issue in focus, “Defeating the Jihadists in Syria: Competition before Confrontation,” and hosted a discussion on nationalist or moderate insurgent forces in Syria, the problems that they currently face, and prospects of strengthening these forces. Kim Ghattas, US State Department Correspondent for the BBC, moderated the conversation with author Itani, the Middle East Institute’s Senior Fellow Robert Ford, and Senior Vice President of the Soufan Group Richard Barrett.

In his report, Itani explores options for the United States and its allies to empower nationalist rebel forces to compete with jihadist forces including the Islamic State of Iraq and al-Sham (ISIS) and the Nusra Front, al-Qaeda’s affiliate in Syria. While he acknowledges that the US-led coalition has successfully inflicted casualties on ISIS and weakened its revenues, he argues that the same efforts have accelerated the rise of the Nusra Front and led to a near collapse of nationalist forces, especially in northern Syria. Due to inadequate support to nationalist forces in the north, local nationalist groups are now forced to cooperate with the Nusra Front to protect themselves against regime forces.

In order to compete with Islamist extremism, Itani suggests the United States and its allies strengthen nationalist forces in the central and northern parts of Syria and increase support in the south, where direct financial and material support under the umbrella of the Jordanian US-sponsored Military Operations Command (MOC) has already led to a degree of military success with a weakened presence of jihadist forces and a smaller degree of rebel infighting.

Ambassador Ford stressed that the United States and its allies must provide nationalist groups with sufficient financial support for them to offer higher salaries than those of the Nusra Front and ISIS. He added that many young Syrians join jihadist organizations to be able to support their families, not because they necessarily share the ideological motive of establishing a global Islamic caliphate. Ford emphasized that the nationalist opposition also needs to prove that they are representing the entire country and the mosaic of people, ethnicities, and religions in Syria—not only the Sunni majority.

Mr. Barrett argued that while higher salaries would attract Syrians to the nationalist cause, he stated that the “glue” for insurgent groups must be a competing ideological component, which reflects and represents a genuine Syrian discourse against the regime and the Islamist extremists.

The panelists agreed that Itani presents in his paper a practical, near-term strategy whereby the US-led coalition can enable nationalist forces to unite, compete with the Nusra Front and ISIS for popular support, and ultimately build the capacity to confront them.