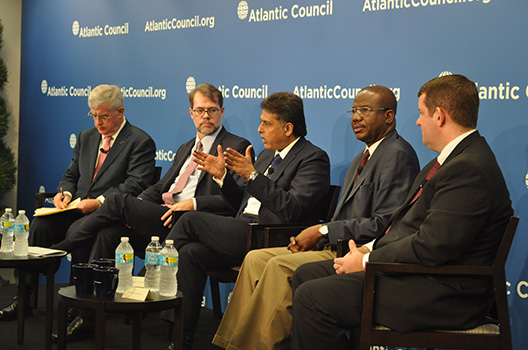 With upcoming elections in the United States, as well as in many countries, the world is at a crucial moment to review the role of technology in the electoral process. Societies increasingly trust the use of technology for mobile banking and financial transactions, and for commercial use in shopping, transportation, and travel, yet when it comes to voting, many nations still rely on pen and paper. Democracy Rebooted: The Future of Technology in Elections, a half-day conference hosted by the Atlantic Council on Friday, October 9, dove into the timely and crucial questions of access, legitimacy, and trust for implementation of technology in elections.

Atlantic Council Chairman Jon M. Huntsman, Jr. opened the event, emphasizing the importance of legitimacy in elections and the role trust plays in thriving democracies. He introduced the keynote speaker, former Secretary of State of the United States Madeleine Albright. A widely respected authority on democracy, Secretary Albright acknowledged the speed with which technology has advanced in the field of elections technology. The Secretary offered remarks and participated in a moderated discussion led by Peter Schechter, Director of the Adrienne Arsht Latin America Center at the Atlantic Council.

“My hope is these new [election] technologies will help open up elections, reduce basis for conflicts, and increase public confidence in the electoral process,” said Secretary Albright. “That outcome is by no means inevitable, and that’s why discussions such as these are so important,” she added. “We have now entered the next era of testing, adjusting, and discovery. We have no choice but to embrace this new era and explore together, as we are in this conference, how best to use the new technologies to achieve a common good.”

“It’s all about technology offering solutions to the principal issues,” Malloch Brown explained. “The ultimate end of it all is not just that we vote online, but that we have a much broader electronic engagement with our government, where we are able to express our views in a continuing way.”

Pat Merloe, Senior Associate and Director of Electoral Programs at the National Democratic Institute, affirmed that although technology could be a useful tool, the context and establishment of trust are the most important features when implementing any change to an electoral process. David Rothkopf, CEO and Editor-in-Chief of the FP Group, predicted a full implementation of internet voting in the future, but expressed concern that online elections could lead to impulse decisions and less thoughtful processes of representative democracy. Rothkopf noted the issue of technology in elections is only one small piece of a larger discussion about technology’s part in shaping the structure of democracy and government.

“We are moving very rapidly toward a world, where in a few years, effectively everybody on the planet will be connected in a man-made system for the first time in history,” said Rothkopf. “That will redefine what community is, it will redefine how people associate with themselves in groups, including in political parties, and it will redefine social interaction.”

A second group of panelists provided a more global perspective on the use of technology in elections. Moderated by Bill Sweeney, CEO of International Foundation for Electoral Systems (IFES), experts from Brazil, India, the United Nations, and the Election Assistance Commission of the United States expanded on the issue of trust. President of the Supreme Electoral Court of Brazil, Justice José Antonio Dias Toffoli, began by explaining the use of electronic voting in Brazil since 1994. Brazilian national laws guarantee a decentralized, auditable voting system, with hackers being invited to test safeguards between elections at formal “hack-a-thons.” Manish Tewari, former Minister of Information in India, affirmed that electronic voting has been successful in the country primarily because Indian society trusts the independent institution that manages the election process, noting this is not universally applicable to all countries.

Despite trust being a necessity, Tadjoudine Ali-Diabacte, Deputy Director of the Electoral Assistance Division at the United Nations Department of Political Affairs, brought up the issues of context, cost, and sustainability. He emphasized that many countries struggle with basic necessities and other important priorities every day, and often do not have the funds to implement election technologies. Matt Masterson, Commissioner at the US Election Assistance Commission, considered transparency and usability, stressing the public will be more likely to trust the process if it is readily understandable, and if election officials can limit uncertainty.

“What you see across the board in election technology is that change is evolutionary, not revolutionary,” said Masterson.

The event was part of a collaborative initiative at the Atlantic Council designed to explore the future of technology in elections. The first event in the series was held in Silicon Valley, where President Toomas Ilves of Estonia—the only country in the world to use internet voting at the national level—gave public remarks at Stanford University and then attended a private dinner. A publication on this issue is forthcoming in 2016.