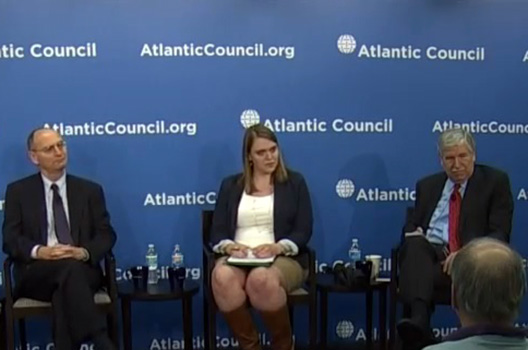 {soundcloud}https://soundcloud.com/atlanticcouncil/framework-for-a-comprehensive-nuclear-agreement-with-iran{/soundcloud}
Kupchan remained critical of the framework, highlighting several substantive gaps, such as the lack of information on timing and structure of sanctions relief. Kupchan also addressed Congress’ role and downplayed its ability to hinder a final deal, assuaging sentiments of some skeptics. Despite his criticism, Kupchan praised the deal for establishing the basic structure required to reduce Iranian enrichment capacity, which will by the International Atomic Energy Agency (IAEA). The IAEA’s extremely thorough monitoring will involve screening everything from Iran’s supply chains to local facilities, Davenport added. She voiced her optimism on the future of a conclusive deal. Addressing critics of the Framework, Davenport stated that any other alternative would be far worse. Limbert was enthusiastic about the future for US and Iran relations. He was quick to point out the “tremendous change” in the dynamics of the two countries, and noted the growing attitude that normalized relations can be mutually beneficial.

At the least, the speakrs agreed, the talks are momentous for opening formal communication channels between the two countries. The talks and the framework agreement represent positive movement in the right direction, yet significant work remains ahead – the deal must be first drafted before June, and then implemented for years to come. In the immediate future, expectations must be managed and Congress persuaded to ensure a successful deal ahead of the final June deadline.