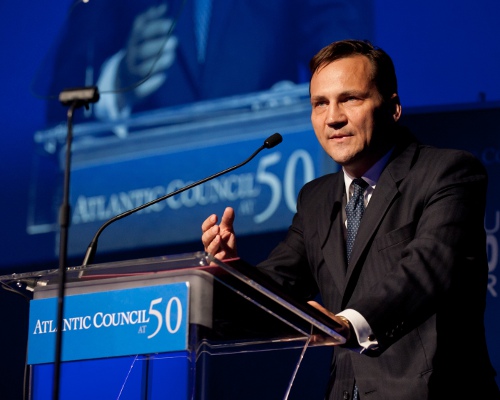 On May 21, 2012, the Atlantic Council hosted an off-the-record members’ conference call with H.E. Radoslaw Sikorski, Polish minister of foreign affairs, as the 2012 NATO Summit drew to a close in Chicago.
Sikorski emphasized the importance of strategic thinking from Alliance members in response to future challenges as NATO and its member states confront some of the most diverse and complex challenges the Alliance has faced since the end of the Cold War. His comments reflected the diverse nature of topics under consideration during the Summit and he shared his views on NATO’s continuing role in Afghanistan, ‘smart defense,’ the Summit’s conclusions on NATO enlargement, and NATO-Russian relations.

Minister of foreign affairs since November 2007, Sikorski also serves as vice chairman of the Civic Platform party. Prior to his current position, Sikorski served as minister of national defence from 2005-2007, and as a resident fellow at the American Enterprise Institute in Washington, DC and executive director of the New Atlantic Initiative from 2002-2005. From 1998-2001, he served as deputy minister of foreign affairs and honorary chairman of the Foundation for Assistance to Poles in the East. As deputy minister of national defence in 1992, Sikorski embarked Poland upon its effort to accede to the NATO Alliance.

This conference call is part of a larger series of Corporate and Individual members’ programming, which seeks to provide members the opportunity to dialogue directly with experts and policymakers on the most relevant topics of the day.