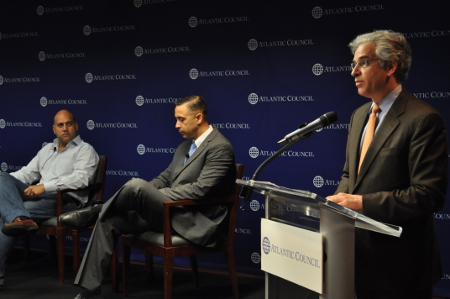 On Friday, May 10, 2013 the Atlantic Council’s Strategic Foresight initiative (SFI), of the Brent Scowcroft Center on International Security, in partnership with Singularity University, hosted a discussion with Mr. Salim Ismail, founding executive director and global ambassador, and Mr. David Roberts, vice president of community development and graduate studies program director, both of Singularity University, to discuss disruptive technologies and how they impact society.

Mr. Ismail remarked on a few major trends regarding technology – digitization, dematerialization, and democratization – as well as on more specific technological developments in a range of industries. The pace of technological development has increased greatly, but the pace at which governments craft policy has lagged behind. Fundamentally, Mr. Ismail said, our systems – civil, governmental, and legal – are not structured to handle the pace of change and the results.

Mr. Roberts began by stating that disruption is not a new concept. He pointed out a number of historical examples of disruptive technologies, and detailed the patterns associated with them. Often disruptive technologies are underestimated by the market in their initial form – as too expensive, too unusual, too difficult. But while disruptive technologies tend to begin below market standards, they make phenomenal leaps and break out of whichever industry they were designed to disrupt. The refrigerator, once it became affordable enough for the private citizen, relegated the icebox to history. Similarly, while Henry Ford did not invent the automobile, his assembly-line process brought down the price of an automobile so drastically it enabled the automobile to disrupt the horse and buggy dominated transportation sector. Mr. Roberts remarked that the fundamental difference between disruption in the past and that of today is the pace of development, a point echoed by Mr. Ismail.

The discussion, moderated by Dr. Banning Garrett, strategic foresight senior fellow for innovation and global trends in the Brent Scowcroft Center on International Security, raised questions about the social impacts of these technologies. Members of the audience raised concerns about privacy and unemployment due to the boom in mechanizing segments of the economy. The speakers countered that even though disruptive technology creates short term hardships, the long term payoff is far greater. All in all, the event was a window into some aspects of Silicon Valley innovations and raised crucial questions about the future of technology for society.