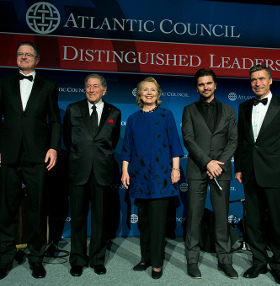 On May 1, the Atlantic Council brought together more than 700 international leaders of business, government, and diplomacy to present the annual Distinguished Leadership Awards.

General James L. Jones, former national security advisor and chairman of the Brent Scowcroft Center on International Security at the Atlantic Council, and Atlantic Council President and CEO Frederick Kempe kicked off the evening by welcoming the crowd to the Council’s annual soiree.

Honored first was NATO Secretary General Anders Fogh Rasmussen, who took the stage to accept the award for Distinguished International Leadership from Susan Cabiati, senior vice president of Meridian International Center. In his remarks, Secretary General Rasmussen outlined the role of NATO in the changing global landscape, advocating for an expansion of the alliance into new frontiers, including economics, culture, and scientific research. “NATO was formed to defend our freedoms. Personal freedom. Political freedom. And economic freedom. These values are more powerful than any military might.” He endorsed a comprehensive trade agreement between the United States and Europe as a means of strengthening the transatlantic alliance based on shared values and mutual goals for a peaceful, free world. “We may be divided by geography,” concluded Rasmussen, “but we share the same values and face the same challenges: cyber attacks, terrorism, missile proliferation, piracy. And no country, and no continent, can deal with such challenges on its own.”

Next, former Cabinet Secretary and US Trade Representative Carla Hill presented the Council’s Distinguished Business Leadership Award to John Watson, chairman and CEO of Chevron. Ambassador Hill lauded Chevron’s commitment to promoting economic growth around the world. Upon accepting his award, Mr. Watson emphasized the vital role that multinational businesses can play in spurring growth and economic development in communities around the world, especially when working in tandem with local governments and NGOs. “Businesses like Chevron, working with government and other key stakeholders, play an indispensable role in helping address the most pressing economic and social challenges at home and abroad,” said Watson. Watson also highlighted the responsibility that corporations like Chevron bear when expanding into new markets. “When American corporations do business abroad,” he explained, “we do represent American values everywhere we operate. We demonstrate the advantage of competition, transparency, and fair dealings in the marketplace, while underpinning our business by contracts and rule of law.”

Latin rock star Juanes was honored for his humanitarian work and social activism. Introduced by Univision anchor Maria Elena Salinas, Juanes gracefully accepted his award for Distinguished Humanitarian Leadership on behalf of his Mi Sangre Foundation, which uses art and education to promote peace in his home country of Colombia. “Today, most individuals with whom we have worked for the past seven years are active peace builders,” said Juanes. “It is because of them that I am standing here today. I have seen them resist from taking a gun or being recruited by illegal arms groups with dignity and talent, with a guitar or spray paint as their instrument of peace.”

Noted philanthropist Adrienne Arsht was on hand to introduce the Atlantic Council’s newest research center, the Adrienne Arsht Latin America Center. Ms. Arsht drew on her experiences living and working Miami, explaining, “Miami is really the future today for the United States… When I returned to Washington in 2008, all I could talk about was what was happening in Miami and how important it was for us to focus on Latin America, and start being aware of the values in that continent that are so similar to ours.”

Former US President Bill Clinton presented the next award via video address for Distinguished Artistic Leaership to legendary performer and humanitarian Tony Bennett. President Clinton praised Bennett for his illustrious musical career, but also his significant work as an advocate and humanitarian. “As long as I’ve known him,” said President Clinton, “he has truly been a citizen of the world: an extraordinary individual who served his country in World War II, marched with Dr. Martin Luther King in Selma in 1965, and has devoted his generous spirit to charitable causes all across the globe.”

The final award for Distinguished International Leadership was presented to former First Lady, US Senator, and US Secretary of State Hillary Clinton. Secretary Clinton was presented with video tributes by President of Malawi Joyce Banda and internationally-renowned political activist Aung San Suu Kyi. She was introduced in person by former Secretary of State and National Security Advisor Dr. Henry Kissinger. Secretary Clinton accepted her award and delivered brief remarks on the state of the transatlantic alliance and the three primary challenges facing NATO in the coming decades: energy security, trade cooperation, and conflict readiness. Secretary Clinton seized the opportunity to endorse a comprehensive transatlantic trade agreement, and to stress that all members of NATO must redouble their efforts to promote transatlantic values around the world. “We cannot afford to let the greatest alliance in history slide into military irrelevance,” she urged.