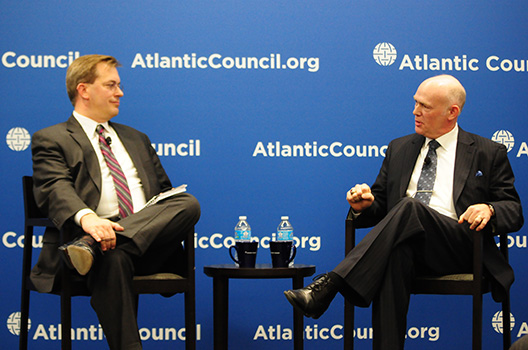 On Thursday November 13, the Brent Scowcroft Center on International Security welcomed Salvatore “Tory” T. Bruno, president and CEO of United Launch Alliance (ULA). The event, titled “Endless Possibilities for the Future of Space Launch,” was the latest in the Atlantic Council Captains of Industry series, a platform for senior executives in aerospace and defense to address the public interests their companies serve and the public policies that shape their markets. The event was moderated by Jeffrey Roncka, managing partner of Renaissance Strategic Advisors.

In his speech and the following Q&A segment, Bruno discussed his vision for the space industry’s future and the role it will play in human history. From GPS systems in our cars and cellphones to satellite television, human engagement in space has contributed greatly to everyday lives. The work of NASA and space missions have been “transcendent,” Bruno said, making space more accessible over the coming years.

This is a topic of great pride for Bruno, who plans to have his company play a major role in America’s future space missions. Bruno hopes to cut both the cost and time needed for space launches in half as the need for and popularity of space exploration increases. In order to do this, ULA and others in the space industry will need to work on new business models that will be accessible for growing commercial use and traditional government use.