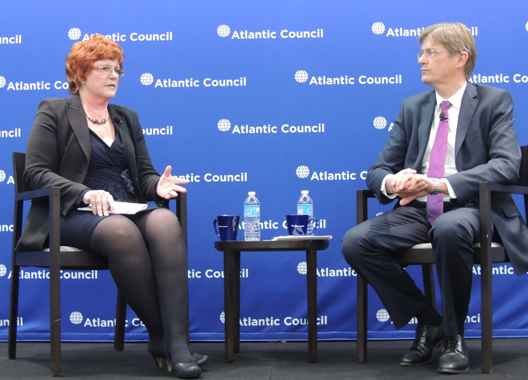 A Conversation with Sharon Bowles, MEP

Sharon Bowles, member of European Parliament, and outgoing chair of the powerful economic and monetary affairs (ECON) committee, gave a public speech at Atlantic Council headquarters after a series of meetings between a delegation of MEPs and their US government counterparts. Bowles spoke about her 5 years as the Chair of the ECON committee, and her experience navigating the committee through the global and eurozone financial crises.

Bowles opened her discussion by describing the geopolitical forces in play when she first became chair in July 2009, when the world was engulfed in financial crisis. President Obama had recently taken office, an event that Europe had anxiously awaited in order to coordinate a response. What emerged from this period were the Pittsburgh G20 commitments, designed to strengthen the financial regulatory system. Meanwhile, the EU began to review its original financial services action plan with a strong desire to “expand and tighten all financial regulation within a more harmonized supervisory framework.” The EU response was further complicated by the Greek sovereign debt crisis, particularly in regards to the redenomination risk it created. The crises spawned a heavy backlash against the bankers and hedge funds, which greatly influenced legislative action, including the Alternative Investment Fund Management Directive (AIFMD), which tackled hedge funds and private equity, plus another piece of legislation related to short selling. In total, 63 pieces of legislation were adopted and 192 other reports, opinions, and resolutions were produced.

Bowles outlined several waves of legislation that had passed during her time as Chair. The first wave of legislation was related to unresolved issues of Basel 2 and 2.5 (also refererd to as CRD3), particularly in regards to “reigning in bonuses” and the trading book, plus AIMFD, the European Supervisory Framework, and credit rating agencies. Internally, the supervisory framework proved to be the most controversial, with Parliament ultimately acquiring a considerable amount of power for the European Supervisory Authorities. Externally, the regulation of hedge funds and private equity caused the most friction. The second wave involved the European Market Infrastructure Regulation (EMIR) to “set up rules for derivatives clearing through central counterparties and reporting to trade repositories.”

Bowles went on to highlight the turmoil in the US over “definitions of swap-dealers and treatment of non-US persons for transaction level reporting requirements placed on non-US swap dealers,” which caused considerable angst. During this time, several measures, including the “six pack” that tightened budgetary controls on Eurozone Member States and subsequent “two-pack,” which proved painful for many EU countries.  The third wave included Basel 3 (CRD4) and revisions to Market Abuse and Markets in Financial instruments legislation. Basel 3, she notes, is still not finished because of issues related to leverage and liquidity. Though there is not the desire to eliminate mortgage institutions, “this does not by any means mean that big banks will get away with using the legislative flexibility that is intended for small banks,” said Bowles. The final wave, she mentions, is the creation of Banking Union. The European Central Bank (ECB) will serve as the direct supervisor of the largest Eurozone banks, encompassing some 130 banks in total. Bail-in rules for bank recovery and resolution have also been formulated. Going forward, she said, “there is still a lot to learn about the interconnection of banks and sovereigns and how to address the lack of flexibility that monetary union creates.” Unfinished business includes “shadow banking, benchmarks, money market funds and bank structural separation.” With regards to transatlantic relations, privacy issues will prove a sticking point, particularly given Europe’s traumatic past (including the Stasi police and other issues of privacy invasion) and the recent NSA scandal, which the US must now work to repair in order to regain trust.

In the Q&A that followed, Ms. Bowles noted that, in order to restore trust on both sides of the Atlantic going forward, a formalized framework of cooperation needs to be in place, so that, when agreements reach international organizations, one party’s vision will not dominate. It would have been more conducive in the past to hammer out some details in the early days, as opposed to later, which could be particularly relevant to ongoing TTIP negotiations. When asked about the controversy surrounding the Banking Union, particularly the perception that it will not help resolve the current crisis, she replied “I don’t think it’s intended for that; I think it’s intended for the future.” In sum, though there is still much work left to be done by the next Parliament, her time as Chair yielded a significant body of work, laying a stable foundation for repairing the damage of the financial crises.