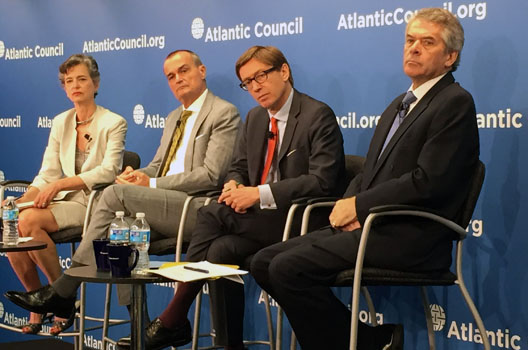 On May 26, the South Asia Center’s Iran Task Force convened French Ambassador His Excellency Gérard Araud, British Ambassador His Excellency Sir Peter Westmacott, and German Ambassador His Excellency Peter Wittig for a discussion on the Iran nuclear negotiations. The event showcased the transatlantic partnership by highlighting the combined efforts of the E3 (France, Germany, United Kingdom), which began over a decade ago, and the United States in bringing Iran to the negotiating table. The Ambassadors discussed the long history of negotiations with Iran, the framework for a deal reached in April 2015, and an outlook for beyond the negotiations deadline of June 30. The Ambassadors spoke candidly and stressed that significant work will remain after June 30, and sanctions relief for Iran will likely occur in late 2015 or later in a best case scenario. They urged that the current framework for a deal is better than any alternatives in preventing a nuclear Iran, but a deal is still not guaranteed since the P5+1 will only agree to a good, verifiable deal.