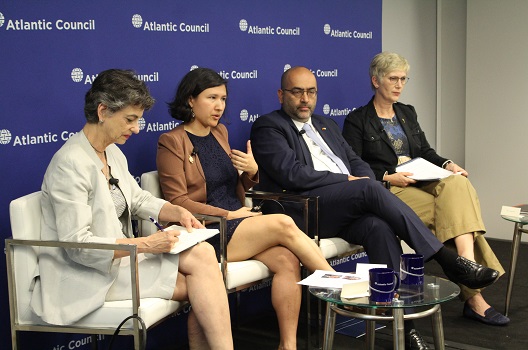 Barbara Slavin moderates a panel with Delphine O, Omid Nouripour, and Caroline Vicini at the Atlantic Council Headquarters on Tuesday May 15, 2018

One week after President Donald J. Trump’s announcement that the United States is withdrawing from the Joint Comprehensive Plan of Action (JCPOA) and re-imposing sanctions, dismayed European parliamentarians spoke at the Atlantic Council with a clear voice: European sovereignty is at stake and Europe will take the necessary measures to defend it.

“There was, until now, no political will in France, in Europe, to stand up to the US,” said Delphine O, a member of the French National Assembly who comes from the La République En Marche party of President Emmanuel Macron. “I think this has changed.”

As European governments scramble to try to save the JCPOA from complete collapse, O said France had been preparing for this eventuality for a year and that there are a number of options open to European countries in protecting their businesses and even retaliating against the United States for any economic damage to European companies doing business in Iran.

“Do we also put in extraterritorial measures?” she asked, comparing possible remedies to the secondary sanctions the US is imposing. “Do we use the WTO [World Trade Organization]? The message we want to convey is that we do not want to go into this second category [of retaliation and trade war].”

Omid Nouripour, a member of the German parliament who also spoke at the Atlantic Council, said that the decision to re-impose sanctions, at a time when Iran has complied with the world’s most robust nuclear verification regime, has led to a poisoning of transatlantic relations, worse than during the Vietnam and Iraq wars. Nouripour said that Europeans were “touched by the pictures they saw” of suffering during the Vietnam war, and in Iraq, “no one had an idea if there was a plan for the day after.” Yet with the US disengaging from the JCPOA, “the core security interests of Europe are touched.”

Nouripour warned that if Iran were to resume its full nuclear activities, others in the region including Saudi Arabia and Turkey would likely launch their own nuclear programs. With the Middle East so close to Europe, he said, this would be akin to the Cuban missile crisis of the 1960s when the Soviet Union installed nuclear weapons 90 miles from the coast of Florida.

Caroline Vicini, the deputy head of the European Union Delegation — like her boss the day before — expressed her disappointment and regret with the US withdrawal from the JCPOA, calling it “reckless.” However, she maintained that the EU would do its best to maintain the nuclear deal absent the United States. “There is no reason for us to freeze cooperation with Iran as long as they are compliant,” she said.