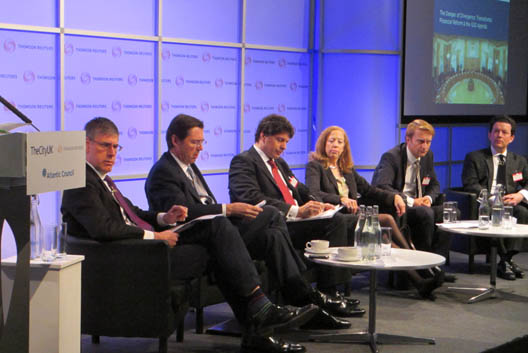 Financial services should be included in the ongoing Transatlantic Trade and Investment Partnership (TTIP) negotiations between the United States and the European Union (EU), but a major obstacle remains the opposition of the US Treasury, a group of British and other European financial experts asserted at a recent London event. The gathering, cosponsored by the Atlantic Council, TheCityUK, and Thomson Reuters, followed the launch of a new report on TTIP and was the last in the Danger of Divergence event series held in Europe and the United States.

Participants underlined that the US Treasury’s position is an isolated one, but they also expressed hopes that Europeans and Americans will be able to reach a compromise. Edward Bowles, regional head of corporate and public affairs in Europe for Standard Chartered Bank and member of the European Commission’s TTIP advisory group, noted that a transatlantic agreement for financial services is not “too big to coordinate,” as long as there is political will from both sides behind such an agreement. “I certainly hope I am not wasting my time,” said Bowles, who serves on the European Commission’s TTIP advisory group. “Industry on both sides of the Atlantic agrees that financial services should be in TTIP. The Financial Management Regulatory Dialogue (FMRD) has failed,” Bowles continued. “Therefore, TTIP is a critical opportunity and needs to be taken advantage of.”

Julie Nutter, minister-counselor for economic affairs at the US Embassy in London explained in further detail the US Treasury’s stance on financial services in TTIP by saying, “the United States and Europe have made lots of progress in the past six years…thus, there are a lot of mechanisms for coordination [in financial services] outside of inclusion in trade agreements.” Institutions like the FMRD and the Group of Twenty (G20) are the preferred routes for coordination by the US Treasury, despite failed persuasions from the US and EU financial industries, and also the European Commission.

The transatlantic financial services markets are the two largest financial markets in the world, and dangerous divergences between the two systems within accounting standards, derivatives standards, and capital requirements still remain, leaving room for arbitrage. As leaders on either side of the Atlantic think of new and strategic ways to shore up these divergences, more and more experts and practitioners alike agree that TTIP, a trade agreement fortwenty-first  century markets, remains an extremely viable channel to ensure the safety and stability of global financial markets. In 2014, with financial markets making up so much of the global economy, “it is hard to decouple financial regulatory coordination” from an agreement like TTIP, stated Charles Roxburgh of HM Treasury in London. “Including services and regulatory coordination in the agreement would mean TTIP will be a completely new kind of deal. TTIP is a modern trade agreement.”

While insights mainly focused around the importance of including financial services in TTIP and closing the remaining gaps in transatlantic financial regulatory frameworks, the conversation also focused on issues within international frameworks. The panelists discussed how and why the US and EU needed to sync processes in order to export financial regulatory rules globally. “Of course the primary goal is reducing divergence within Europe and the United States, but global coordination is also critical,” commented Adam Farkas, Executive Director of the European Banking Authority. “How can we agree globally [on financial regulation] if the two biggest markets, which are most similar, cannot agree bilaterally?” Peter Kerstens of the European Commission asserted.

The Danger of Divergence event series underlie that, essentially, all sides are now on the record, coming out in favor of financial services in TTIP, with the exception of the US Treasury. Although the G20, FMRD, and other global institutions have been viable channels for transatlantic coordination before, pressure from emerging global markets makes the coordination of US-EU rules more crucial. The  American and European economies will face a growing number of new competitors from emerging markets with different financial regulatory standards in years to come, making the finalization of transatlantic financial regulatory coordination all the more important.