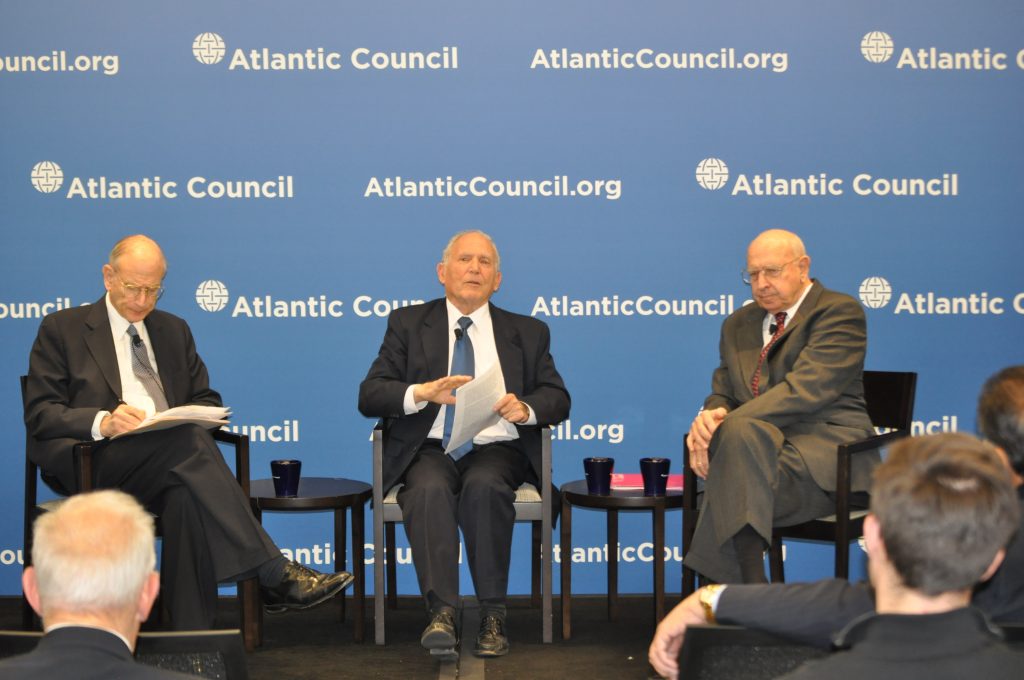 The South Asia Center’s Iran Task Force co-hosted a discussion with the Open Society Foundations on  the implications of a nuclear agreement with Iran. Former Deputy Secretary of the Treasury, Ambassador Stuart Eizenstat, moderated the discussion with former Director of Israel’s Atomic Energy Commission, Brigadier General Uzi Eilam; and former Undersecretary of State, Ambassador Thomas Pickering. {soundcloud}https://soundcloud.com/atlanticcouncil/breakthrough-or-extension-implications-for-us-and-european-relations-with-iran{/soundcloud}
The three engaged in a lively talk in which the likelihood of both possibilities, reaching an agreement by the deadline or not, were addressed and scrutinized. In closing, Ambassador Pickering said that the deadline was likely to be extended. General Eilam told the audience that any agreement with Iran should: ensure that Iran is at least one year away from having enough enriched uranium to build a bomb; be in effect for ten years; not lift all sanctions on Iran, but take some steps that will “give some hope, some encouragement, some support” for Iranian moderates. Acknowledging that some Israelis have concerns about a nuclear deal with Iran, Eilam said, “I am much more optimistic than my colleagues in Israel, but I think that I am right!”

Image: Former top US officials—Ambassadors Stuart Eizenstadt, left, and Thomas Pickering, right—join Israel’s retired Brigadier General Uzi Eilam, center, in a discussion of the prospects for an agreement to let Iran develop its nuclear program. Amid the challenges and risks of reaching a deal, Eizenstadt described “huge advantages to the United States, the West, and to Israel in having an agreement along the lines of what we see emerging.” (Atlantic Council photo)