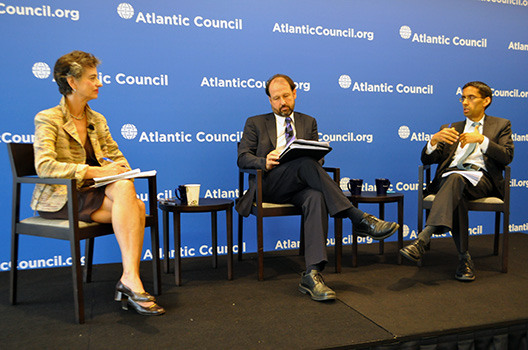 A tradeoff does not exist between Iran’s enrichment capacity and more intense verification measures placed on Iran’s nuclear program. Daryl Kimball, executive director of the Arms Control Association, and Michael Singh, managing director of the Washington Institute for Near East Policy, agreed that each are significant to a final agreement independently. Iranians have argued that the number of centrifuges possessed by Iran, or the capacity of its enrichment program, should not be subject to a final agreement if Iran concedes to intensive verification measures that enable monitoring of facilities and preventing a “breakout” from enrichment to weaponization.

“It’s not as simple as trading off transparency for allowing Iran to have additional centrifuges,” stated Kimball speaking at an Atlantic Council Iran task Force event. “An effective agreement is going to involve both limits to the centrifuge capacity of Iran and more intrusive, more effective safeguard measures.”

Singh agreed, stating that breakout capacity is just one factor in reaching a deal. “You see competing narratives from the Iranians and the P5+1,” said Singh. “The Iranian view is that they should be able to do what they want within the confines of the NPT (Nuclear Nonproliferation Treaty) as long as it is safeguarded. The attitude of the P5+1 is even allowing Iran a small program, given its past violations, is a major concession itself.”

Given these drastically different perspectives, a deal rests on three broad principles. It must be verifiable, irreversible, and stable. These principles ensure an agreement is technically implementable and not subject to changing political dynamics or continued crossfire, in which the application of the deal would come into question. Barbara Slavin, Atlantic Council South Asia Center senior fellow, argued that a deal must also be defensible within domestic audiences. Both the United States Congress and Iran’s Parliament, and respective publics, must prescribe to the agreement reached. This factor has affected how each side has negotiated, and a stable and irreversible deal may require compliance from these groups.

“The Iranian enrichment capacity remains the biggest gap in the negotiations right now,” stated Kimball. Given its current capacity of 20,000 installed centrifuges, of which about 9,000 are operating IR1s centrifuges, Iran could theoretically produce enough hexafluoride gas to enrich a natural uranium stockpile to 90% for one nuclear device. “But this alone is not a nuclear arsenal,” Kimball states. Many steps are required between this capacity and possessing a functional nuclear weapon. The P5+1 seeks a safe level of capacity that would allow the international community to react and prevent weaponization if these steps are initiated.

The United States has pushed for a reduction in capacity to 1,500-2,000 IR1 centrifuges. The United States also wants Iran to reduce stored material to increase potential breakout time to 9-12 months. Contrarily, Iranians seeks an increase to an “industrial scale—around 100,000 maybe 120,000—by 2021,” arguably to reduce energy dependence on Russia.

Despite these differences, many spectators to negotiations are hopeful for an agreement. Audience Member Kelsey Davenport of the Arms Control Association shared her perspective after attending the latest round of negotiations in Vienna. Davenport senses a real change in atmosphere with the presence of John Kerry in Vienna. Zarif reported that he sensed a way forward after detecting a sensibility and willingness from the United States to move forward. Kerry also stated that the messages from Zarif in the negotiation room were far different from the more extreme rhetoric coming from Iran. In September, both sides will have the opportunity to meet at the ministerial level again, alongside the United Nations General Assembly meetings and continue this progress. “Giving both sides the opportunity to talk to their capitals during the August break and explore some of the flexibility that both Zarif and Kerry mentioned, particularly around the Uranium enrichment question, certainly leaves a way forward for these talks,” said Davenport.