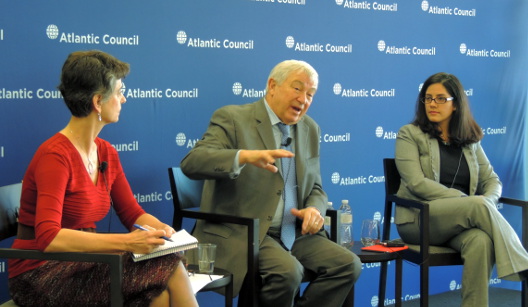 With the signing of an interim accord providing limited sanctions relief in return for restraints on  Iran’s nuclear program, attention has focused on whether Iran will be able to increase its currently depressed oil and natural gas exports and whether multinational oil companies will again be willing to invest in Iran’s energy sector. Sara Vakshouri, president of SVB Energy International, and Guy Caruso, senior advisor for the Center for Strategic and International Studies, spoke at the Atlantic Council to discuss these ideas and suggest what like changes will occur in the near future.

Vakhshouri and Caruso agreed that Iranian oil production is not likely to increase dramatically in the near term and that world oil supplies are sufficient to manage for some time without an increase. However, Vakhshouri said Iranian oil minister Bijan Zanganeh believes Iran can return to producing 4 million barrels of oil a day while significantly increasing production of natural gas and petrochemicals. In the aftermath of the Nov. 24 nuclear accords, Iran is planning a major energy conference in April and anticipates European attendance, she said.

Caruso noted that Western oil companies are unlikely to sign new contracts while negotiations continue over a long-term nuclear accord but “want to be in position whenever that day comes” to return to the Iranian market. Even with the growth of shale and other unconventional sources of oil, Iran offers many advantages, Vakhshouri observed, with production costs of oil ranging between $2-$7 a barrel. Caruso said oil from shale costs the equivalent of $12-$24 a barrel to produce.

In the short term, Vakhshouri said, Iran will benefit from easing sanctions on insuring its oil shipments. European companies had provided insurance for 95 percent of Iran’s oil tankers and this has been Iran’s “Achilles heel,” she said. Bijan Khajehpour, an expert on the Iranian economy who attended Wednesday’s event, added that the repatriation of several billion dollars in Iranian oil revenues under the Nov. 24 agreement would allow the Iranian government to pay back some of its local subcontractors, who in turn will be able to hire more workers and reduce Iran’s high unemployment. Khajehpour said Iran is likely to place less emphasis on oil exports in the future and more on natural gas and petrochemical products. “The dynamics are shifting from oil, where Iran is vulnerable [to sanctions and international competition]… to selling diesel to Pakistan and exporting electricity to Afghanistan, Iraq and Turkmenistan,” he said.